A quick repost (perhaps if I was a twitterer, it'd be more appropriate for the shorter format), but perhaps this sums up why we need shale gas in the first place: 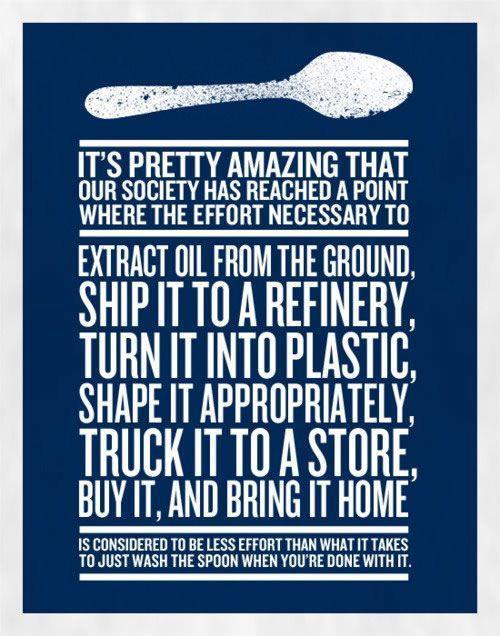 Ever want to know what frack job looks like? Here's a video:
What is this video showing, I hear you ask? This is a plot of all the microseismic events occurring during a frack-job. As the fluids are pumped in, the rock begins to break and fracture. The fracturing releases seismic energy. In many ways this process can be considered analagous to earthquakes, except they are many orders of magnitude smaller. Hence they are referred to as microseismic events.
Geophysicists place geophones in the ground near to the region of interest. These geophones detect the P and S-waves produced by the microseismic events, allowing us to compute their locations. We use their locations to create a picture, showing where the fractures have gone during the frack job.
This video is a map view of event locations. The injection point is at (0,0). The events track the formation of a fracture zone approximately 300m long, with a strike of 080 degrees, over the course of the frack job (in 3 stages, over 10 hours in total, from 7 in the morning to 5 in the afternoon).
Acknowledgements for this video to Andreas Wuestefeld, my colleague at Bristol University.
If you want to ask a question about this video, do post a quick comment.
Posted by Dr JV at 01:55 2 comments:

Why shale gas reservoirs need to be fracked

Seeing as I'm on a roll today (it's a cloudy Saturday, and I'm a little hungover with no current desire to do anything but lie on the sofa and mess about on t'internet) I thought I'd add one last post that might help explain why we need fracking to extract gas from shale formations (this will also give me a chance to test out how blogger handles images). This comes from a simulation I use to teach undergraduates at Bristol about fracking and shale gas.

In the first example, we try to extract gas from a shale reservoir with 5 vertical wells, and no fracturing. The low permeability means that gas is only extracted from the regions immediately adjacent to the wells. The resulting gas production rates are plotted - a paltry 3000m3/day. 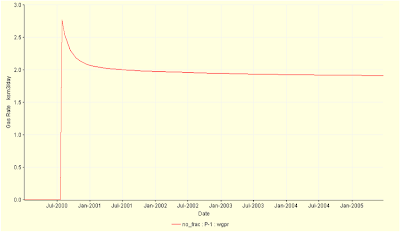 The second example shows what happens if the wells have been fracked. A high permeability zone (in green) now extends from each well. This means that we can now access the gas from a much higher proportion of the reservoir, as it flows into the fractures and then into the wells. Now, the gas production rate hits a peak of 500,000m3/day during the first year, before tailing off to a rate of 50 - 100,000 m3/day. Much more gas, much more money. All hail fracking! 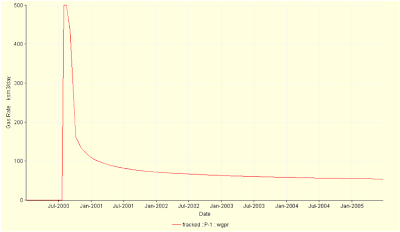 Or so it would seem. However, this simulation also highlights a possible issue with shale gas and fracking. After the first year or so, production often tails off dramatically, meaning that new wells must be drilled, and new fracking operations carried out, almost constantly to keep extracting the gas. It's not like some conventional field where you drill a well, and then it keeps producing for the next 20 years. Good news for drilling engineers and geologists who'll be kept in a job, but it makes extraction more expensive, and the more you frack, the greater the potential for things to go wrong.


Note of acknowledgement - this reservoir simulation was creating using 'Tempest', which is developed by Roxar Ltd.
Posted by Dr JV at 07:22 2 comments:

A little about myself

Having welcomed you to my sparkly new blog, I feel I should introduce myself properly. I am a research fellow at the University of Bristol. Given the current vogue in academia for multi-disciplinarity, I suppose I would describe myself as an applied geophysicist-cum-geomechanical engineer. Which, in short, means that I'm interested in rocks. In particular, I'm interested in the mechanical behaviour of rocks - how they deform, break and fracture - and also in how we go about monitoring this behaviour (which is a challenge, given that you're often separated from the rocks you're interested in by a couple of solid kilometers of other rocks).

Given the highly politicised nature of the debate about fracking, I feel I should make some statements about any conflicts of interest. The funding for my research comes from the UK government science research councils (NERC, to be precise). Nevertheless, we work fairly closely with industry - they often give us datasets from past fracking operations for us to look at. We're interested in developing techniques that will allow us better control over where the fractures go, and techniques that will allow us to image then fractures - as are the companies conducting the fracking, so we have a lot of common ground. There are other people in our research group who are funded directly with money from industry, and indeed, several of my ex-colleagues (and an M.Sci student I co-supervised) have gone on to jobs in the shale-gas industry.

But I would not consider myself to be an industry stooge. I suppose I would describe my views as being mildly pro-fracking, but only when done properly. I believe it is possible to frack without damaging the local environment, but only if done responsibly. There are many temptations to cut corners, and I suspect this is what has sometimes happened in the US. Many shale gas wells are pretty marginal economically, so there must be pressure to take short-cuts in monitoring and controlling the frack, and in disposing of the waste materials properly. I'd very much like to avoid that happening in Lancashire.

So, truth be told, my views on fracking are still developing. In particular, while I'd like to think that I know a fair bit (so modest) about the mechanical behaviour of rocks during the fracking process, I don't think I've thought enough about the wider social, political, economic and environmental (both local groundwater, and in terms of climate change) issues of shale gas exploitation. I suppose this blog is a way of addressing that - by forcing myself to write about it I'll force myself to think about it a little more. So I guess I might as well be talking to myself.....

So if seems like I contradict myself, or if appear to change my views on shale gas, then that's because I'm holding contradictory views, or I'm changing my mind. I'm a scientist, and all good scientists reserve the right to change their mind when the prevailing evidence dictates.

So it begins......
If you haven't heard the news, after some exploratory drilling, Cuadrilla reckon that the shale gas reserves underneath Lancashire amount to approximately 200 trillion cubic feet. That's a lot of gas! Enough to fill 2 billion Olympic swimming pools (and x billion double decker buses and to cover y Waleses to a depth of z meters, etc etc etc). Put another way, and perhaps more importantly, at a price of $7 per 1000cbf (2007 prices, I don't have current prices to hand), that's $1.4 trillion dollars-worth of gas. Check out news articles here and here, for instance, or just about any other newspaper of your choice.
So what's this gas doing here? By which I mean - why didn't we drill and extract all of this gas at the same time as we were exploiting and developing the now-nearly-depleted North Sea reserves, back in the 70s and 80s? The reason is that under Lancashire the gas is trapped in shale rocks, rather than the sandstones that all oil industry geologists like. Because shales are made of tiny mud and clay particles, rather than nice round sand grains, they have very low permeability, making the process of sucking the gas through the rock to the well bore very challenging. Imagine trying to suck your drink through a straw filled with mud. Up until a few years ago, we couldn't do it.
However, a new technology has recently been developed to access this previously unexploitable gas. After a well is drilled, fluids (usually water, but sometimes CO2 or nitrogen gas) are pumped down and into the reservoir at high pressure. The effect of these high pressure fluids is to overcome the strength of the rock, causing it to fracture. The fractures in the rock provide corridors down which the gas can flow to get from the rocks to the well (and then eventually to our boilers and power stations).
The most likely reason you've found this blog is that you're already interested in fracking, (let's face it, it won't be for the humour, or Shakespearian-quality prose...) so you'll already be aware that this fracking process is controversial to say the least. There's the possibility of groundwater contamination from the chemical additives in the fracking fluid, there's the possibility of water contamination from methane rising from the reservoirs (cf. all the infamous flammable taps videos you'll find on youtube). And of course, there are those who feel, given that we already have enough fossil fuels at our disposable in known reserves to leave our planet considerabley warmer than nature intended, that we shouldn't be wasting time, money and effort exploiting and finding more hydrocarbons when we could be developing and encouraging greener, renewable options.
So it is on these issues that this blog will focus. I am an applied geophysicist-cum-geomechanical engineer, and I have some experience with monitoring fracking operations, so hopefully you'll find some informed opinions, ideas and facts on this blog. But I'm still not sure I have the answers to these questions. To frack or not to frack? That is the question. I intend to find out. On the way I hope to inform, engage and enlighten. And if I happen to amuse or entertain, I promise, it was entirely accidental....
Posted by Dr JV at 01:39 2 comments: