Most people reading this blog will be familiar with the operators involved in developing UK shale - the likes of Cuadrilla, IGas and Dart. Most will also be aware of the buy-ins from the bigger players like Centrica, GDF Suez and Total.

However, the operators are only a part of the whole story. There is a whole supply chain needed to get shale development off the ground in the UK. Much of the work done by the operators is in fact contracted out to these suppliers, which are often UK-based "Small and Medium Enterprises", which are often referred to as the "life-blood" of our economy.

There are a lot of great British SMEs out there who have found that the skills and services they offer are proving useful to operators looking to extract shale gas in the UK. I'm a geoscientist, not an economist, so I tend to focus on the geoscience issues around shale, rather than the economics. That said, I think the assumption is often made that the only people to benefit from UK shale will be the operators: the handful of shareholders who own Cuadrilla, IGas et al. In fact, there is a whole supply chain of SMEs that will reap the benefit if shale is developed in the UK. This was made clear in the recent Lords report on the economic impacts of UK shale gas.

Because the sign over the door (over the rig?) is usually that of the operating company, most of the work done by these SMEs goes unnoticed by the general public.

With that in mind, Frackland is proud to introduce its latest feature (following on the success of "Images of the Day"): Spotlight on SMEs. Each post will showcase the work being done by a British SME that stands to benefit from the development of a UK shale industry. You'll find that there's a lot more to UK shale gas than Cuadrilla and IGas.

This week's SME is Remsol, a waste management service involved in treating and disposing of waste flowback fluids after hydraulic fracturing has taken place.

Remsol was founded in 2002 by Lee Petts, a waste and environmental management expert living in Preston, Lancashire. The firm initially cut its teeth dealing with waste from the pharmaceutical and chemical manufacturing industries. They have built a reputation for solving complex and difficult waste problems, sometimes in unconventional ways.

As case example comes from Tessenderlo, a Belgian chemicals manufacturer. A production process had gone awry at its Widnes plant, contaminating 400 tonnes of hydrochloric acid with chlorinated toluene. The conventional waste industry approach would be to take it away, neutralise it and then dispose of it. However, this would prove to be prohibitively expensive, and couldn't be completed within the necessary timescale (only 3 days). Remsol succeeded in finding a buyer who was able to utilise the acid, despite the small concentration of chlorinated organic material, and arranged for all 400 tonnes to be shipped off site over a 2-day period.

Being based in the NorthWest, Remsol were aware of Cuadrilla's hydraulic fracturing plans at an early stage. Initially, Remsol wondered whether treated waste water from other industrial applications, instead of fresh mains water could be used as a cheaper alternative. Understandably, however, Cuadrilla wanted to have complete control over what they were injecting in order to guarantee safety, so this was a non-starter.

However, after their fracking tests in 2011, Cuadrilla's flowback fluid was found to contain small quantities of Naturally Occurring Radioactive Material (NORM). United Utilities made a commercial decision not to process the flowback water at their Davyhulme site, so Cuadrilla were in the market for someone who could process flowback water containing NORM, which lead them back to Remsol.

Through their contacts in the UK nuclear sector, they identified a process that has been used to remove low levels of radioactive material from waste water for over 40 years - a process similar to a slightly more complex 3-stage chemical separation and filtration process conducted at about a dozen waste treatment facilities around the UK. In collaboration with some of these operators, they demonstrated, first in the lab, then at plant-scale trials, that the process was able to remove more than 90% of the NORM particles, reducing the radioactivity of the wastewater to a level lower than that found in your average bottle of mineral water.

Their early successes with Cuadrilla mean that Remsol are gearing up to play a key role as the industry develops. The flowback disposal issue is one that resonates with the public, and they've been engaging with local people in the Northwest to address fears in a calm and rational manner. "Radioactivity" is a word that can scare people easily, and it's important that the levels of radiation in flowback fluids are put into perspective with the amounts of radiation we are exposed to as we go about our daily lives. They've also listened some of these concerns - the issue of road traffic, for instance - so are using larger tankers to reduce the number of journeys needed, and developing onsite clean-up facilities, so that the fluid can be recycled and reused. This significantly reduces the amount of water required, as well as reducing tanker journeys.

The purpose of "Spotlight on SMEs" is to draw attention to UK companies involved in the shale gas supply chain. When I contacted Lee, he had this to say about the importance of UK companies getting involved:


"For shale gas to succeed, the industry needs to make good on its promises about local jobs and supply chain roles.

To deliver the maximum economic benefit for the country, we need to see a mostly British supply chain (that pay corporation tax here) comprised largely of SMEs - because it will be smaller firms that have to take on new staff in order to grow and meet demand, thus boosting jobs - with priority given to companies based in the areas where shale gas activity takes place.

It's important that we show there is already a well-developed SME supply chain in place that has both the desire and skills to perform the necessary work to the required standard.  If we don't, I think there's a real risk that the big oil field services companies like Halliburton, Schlumberger and Baker Hughes will come to dominate the supply chain space, along with the global environmental consultancies, civil engineering giants like Babcock, Carillion and AMEC, and water treatment firms like French-owned Veolia - companies that are all big enough to take on a lot of the work without taking on new people, and that will perhaps pay their taxes in countries other than Britain."

In the first "Spotlight on SMEs" post, I showcase an SME (small/medium enterprise) that has already worked with Cuadrilla and IGas to assess the environmental impact of their sites.

Ground-Gas Solutions is an environmental monitoring consultancy that currently employs 15 people, although that number is expected to rise quickly in support of a growing shale sector. The main office is based in Manchester, but they have people working all around the UK. GGS specialise in monitoring ground and air pollution around industrial sites. GGS was founded in 2009 by Simon Talbot and John Naylor, who have previous experience in landfill monitoring and contaminated land investigation.

While GGS serve a number of sectors, their services are already proving useful to shale gas operators. While environmental monitoring is not a new thing, GGS have developed novel sensors capable of monitoring the concentrations of potential pollutants like methane, hydrogen sulphide and volatile organic compounds (VOCs) continuously, rather than at discrete and irregular intervals. The image blow shows how a sensor is set up in a borehole to detect potential pollutants moving through the ground. Continuous monitoring is crucial for both baseline surveys and during operations. The baseline is absolutely necessary to determine what the site was like before the operating company arrived at the scene. Methane in particular can occur naturally. Without a baseline, it is almost impossible to determine whether methane around drilling sites has been caused by the drilling, or was already there naturally. Baseline monitoring allows you to see whether anything has changed due to drilling.

Importantly, naturally conditions can fluctuate due to seasons, the weather, the tides and many other reasons. For instance, the figure below shows variations in natural methane levels caused just by atmospheric pressure changes. 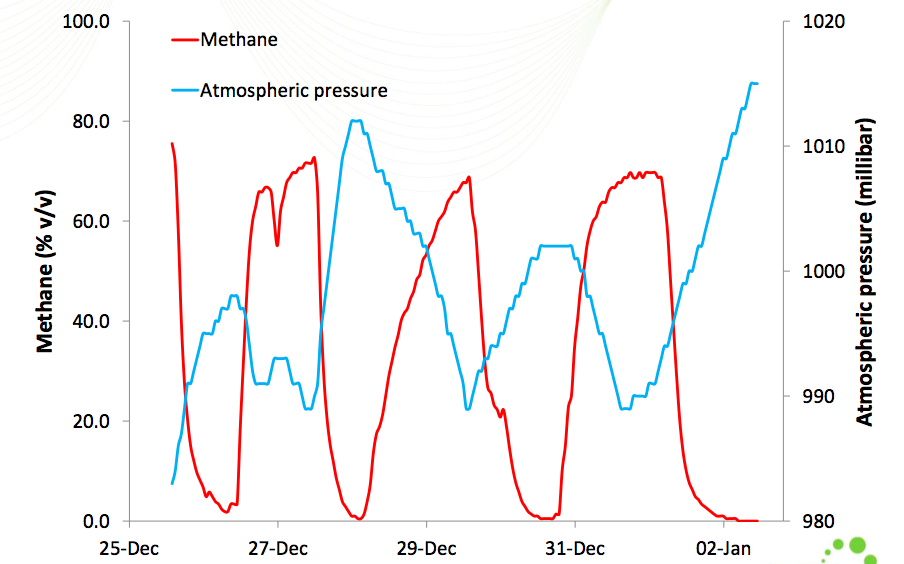 If the baseline was simply taken as a discrete measurement at a single time, all of this variation would have been missed. Similarly, during operations it is important to know immediately if anything untoward is happening. Constant continuous monitoring means that the operator can be informed immediately if pollution is detected, so that remediative actions can be taken.

A final figure shows the breadth of measurement currently being taken around potential shale gas sites in the UK. 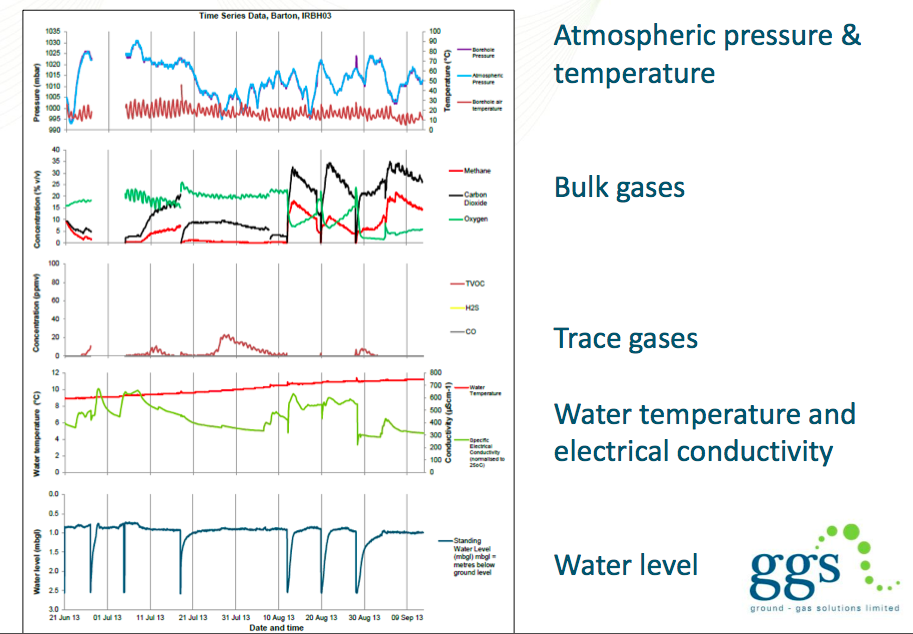 So there we have it: our first spotlighted UK SME. GGS are providing environmental monitoring services to keep an eye on UK shale operators. Cuadrilla et al know they can't afford to leak any methane with these guys on the scene!