To all my geological readers: Happy Geologists Day.

Geologists Day was created in the USSR to honour Soviet geologists for their role in finding the minerals and oil that built and fuelled the soviet state. It falls on the first Sunday of April, as this would be when the summer field season began. 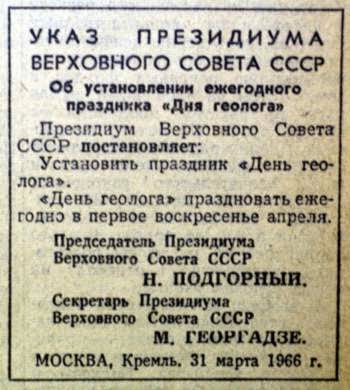 Having lived in Russia for several years, and being a geologist of course, this day has particular resonance for me. Courtesy of "Dr Geophysics" a poem and a toast:


To all geologists, loving and gentle,
Whose clothes are baggy and who dressed very neatly.
To all very young ones and very mature,
Who are hiking peninsulas, mountains, and islands,
Avoiding tsunami and looking for landslides.
Geologists very romantic (there are no others).
(Translation from the Russian poem)

Я предлагаю тост (Ya predlagau tost - I propose a toast*):


“Dear friends, let us drink a few drops.
May the geologists, working far from home,
in the wildernesses and the most remote regions of our restless planet,
soaked by rain, frozen by snow, yet warmed with friendship,
safely return home to their loved ones”

*Toasting is a big part of any Russian meal. At a meal, each guest is expected to propose a toast, which is accompanied by a slug of vodka - if you have a lot of guests it can end up being a lot of vodka! Since I mainly hung out with other ex-pats, I never learned a lot of Russian, but Я предлагаю тост is definitely one phrase that stuck!

Something I've learned while writing this post is that when Geologists Day was inaugurated in 1966, geology was a very romantic subject in Russia, as field parties explored and mapped the uncharted corners of vast Siberia. It seems like a good escape from the oppressive soviet authorities of the time. Indeed, the field of geology even produced a recognised school of poetry in 1950/60s Leningrad (St Petersburg). Sadly my Russian isn't good enough to translate any of this work, but I would be interested in finding translations.