This week, shale gas has hit the movies once again. I really need to get on with hiring my own director. Josh Fox, of Gasland fame, has released another short anti-shale-gas film. It's embedded here for your enjoyment:


As usual, a little balance is needed, so we'll swing to the opposite side of the political compass with a comment by EID.

The thing that struck me immediately watching this short was the apparent lack of any kind of geologist or drilling expert. The film shows papers from the standard literature that we work with everyday, but apparently he couldn't get comments from anyone? I find that surprisingly lazy if anything, because given enough beer you can usually get a geologist to come up with some kind of contrarian opinion about something. So why couldn't Josh get any geologists on film?

The other really noticeable thing is that the line of attack has completely shifted from fracking to well completion activities. I can only assume that this is a tactical retreat, a tacit acceptance that the fractures created during fracking are demonstrably too small and too deep to have any kind of influence of shallow aquifers.

And if fracking is not the problem, then the only other source of leakage must be from the well bores. Josh is right that well bores can fail. But this is a problem that we know lots about, because it's a problem in conventional gas drilling as much as it is for shale gas. So the question changes, from are you ok with having fracking going on in your back yard (and fracking sounds scary, new, dangerous) to are you ok with any gas well (conventional or shale gas) in your back yard? Which generally elicits a quite different response, because conventional gas is something people have more faith in, simply because it's been around for ages without causing many problems. For instance, Western Europe's largest onshore oil and gas field, Wytch Farm, is sited under some of the most prized and expensive real estate in the country, and noone seems bothered by it.

The failure rates cherry picked from the literature seem absurd to me: 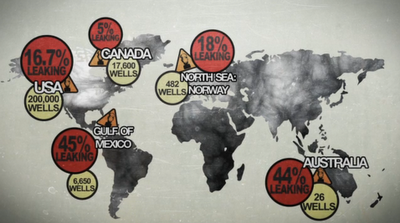 Casing failure and leakage rates at almost 50%? Seriously? I think if we had problems in conventional gas fields on this scale, we'd really know about it? We've drilled millions of gas wells across the planet - if 50% of them had failed, we'd have contamination everywhere, most of the time. The problem stems from cherry-picking - there are plenty of reports out there that show well failure rates at 0.01%. Because the debate over shale gas has become so polarised, these numbers don't get a look in here. But it'd have been nice for Josh to at least to have gotten some geological expertise onto film to help him go through the figures.

Finally, even if failure rates were below 1%, doesn't that still sound pretty risky? Well, if well failure was a done deal "that's it, nothing we can do now" type thing, then maybe. But well casing failure is easy to detect - before you being production you run a tool down the well that detects failure. If there is failure, you do a workover to correct the damaged section. All you need to have is regulation that requires companies to do this. It'll cost them more money, and so they'll probably have a moan, but that's the kind of thing we mean when we talk about having a strong regulatory regime for shale gas extraction in the UK. Sorry Mr Company person, get that cement log running before you even think about producing from that well!
Posted by Dr JV at 05:36 3 comments: Links to this post

Really interesting interview with James Lovelock by the Guardian this weekend:

For those living under stones, James Lovelock is a renowned environmental scientist, famous for the Gaia hypothesis, which posits that the earth and its biosphere many of the features of a living organism, such as internal regulation of temperature and chemical composition. His work in detecting the increase in atmospheric CFCs that created the hole in the ozone layer was also crucially important.

The interview covers a range of topics, but as this blog is about shale gas and fracking, I'll obviously focus on these parts. Here are the most relevant parts of the transcript:


Gas is almost a give-away in the US at the moment. They've gone for fracking in a big way. This is what makes me very cross with the greens for trying to knock it: the amount of CO2 produced by burning gas in a good turbine gives you 60% efficiency. In a coal-fired power station, it is 30% per unit of fuel. So you get a two-to-one gain there straight away. The next two-to-one gain you get is that methane has only got half its energy in the carbon, the other half is in the hydrogen, so there's a four-to-one gain in CO2 output from the same amount of electricity by burning methane. Let's be pragmatic and sensible and get Britain to switch everything to methane. We should be going mad on it. The fear of nuclear is now too great after Fukushima and the cost of building new build plants is very expensive and impractical. And it takes a long time to get them running. It is very obvious in America that fracking took almost no time at all to get going. It happened without any debate whatsoever. Suddenly you found there was this abundant fuel source. There's only a finite amount of it [in the UK] so before it runs out we should really be thinking sensibly about what to do next. We rushed into renewable energy without any thought. The schemes are largely hopelessly inefficient and unpleasant. I personally can't stand windmills at any price. Hydro, biomass, solar, etc, have all got great promise, but they're not available tomorrow, or even in 10 years.


The most sensible thing is nuclear, but I'm afraid the great bulk of people are not going to have it after Fukushima. They think nuclear actually caused the disaster. It's so bizarre that's it's almost unbelievable to a scientist, but they do. They conflate the two together. But maybe we've got enough shale [gas] under Britain. There's certainly lots of it. Now, that's not the complete answer, but it will carry us on for the next 20-30 years. Fracking buys us some time and we can learn to adapt.

It's clear that Lovelock is on board with the fact that, if we're serious about cutting CO2 emissions, replacing coal-fired power plants with shale-gas-fired plants is an excellent way of quickly reducing CO2 emissions. Nuclear would be too, but it takes a long time to build new plant. The risks of all out renewables and abandoning all base-load generation capacity are made clear by Germany's post-Fukushima example of shutting down all nuclear power:


Germany is a great country and has always been a natural leader of Europe, and so many great ideas, music, art, etc, come out of it, but they have this fatal flaw that they always fall for an ideologue, and Europe has suffered intensely from the last two episodes of that. It looks to me as if the green ideas they have picked up now could be just as damaging. They are burning lignite now to try to make up for switching off nuclear.

Finally, I find his ideas about both ultra-Greens and Tea-party-ers as becoming quasi-religious really interesting.


It's just the way the humans are that if there's a cause of some sort, a religion starts forming around it. It just so happens that the green religion is now taking over from the Christian religion. I don't think people have noticed that, but it's got all the sort of terms that religions use. The greens use guilt. You can't win people round by saying they are guilty for putting CO2 in the air

Certainly, you only have to scroll into the comments section to note the baying crowd calling to burn the heretic who dares praise shale gas as a potential solution. Certain ideas, once out there, are clung to with what can only be described as religious fervour, regardless of the evidence.

For instance, I still regularly come across the claim:


Companies are keeping secret the chemicals they're putting down the wells. Why are they kept secret? What have they got to hide? It must be a big conspiracy....

despite the existence of this website, where you can find details of every chemical put down every well in the US.

Despite being behind the curve in not having a shale gas film of my own, it seems I've been strangely prescient in talking about shale gas in the movies yesterday. Mere hours after my post, another shale gas movie has been announced: Truthland. Right from the font and style used in the title, you can see that this is intended to be a direct rebuttal to Gasland. In similar fashion, a folksy, homespun Pennsylvania dairy farmer takes a journey around America, talking to experts, visiting drilling sites, to find out that shale gas drilling is in fact completely fine and ok. Given that the film was funded by Energy in Depth, which in turn draws its funding from gas companies, you'd kind of expect that, but anyway, here's the trailer:

With naught but a humble weblog to my name, it appears that I'm well behind the curve when it comes to talking about fracking. This year, if you want to talk about fracking, you have to do a movie.

Even Matt Damon is getting involved, with 'The Promised Land', which is a fictional story about businessmen and drilling rights in Pennslyvania. I must be careful here to not mess with Matt Damon, who in general I agree with about most things. (Aside - quality NSFW video here). But I don't have much hope that that shale gas, fracking and the people involved in the business, will come out of this well. The 'plucky-little-guy-versus-big-nasty-corporation' storyline is just too good for Hollywood to pass up.

Truth be told, I think the 'little-guy-versus-nasty-coporation' meme is so powerful in our culture that we pretty much immediately distrust anything we here from any establishment body or corporation, with little assessment of the evidence. I'm not saying that's right or wrong - there's plenty of bad stuff that's happened to warrant such mistrust - but I do wonder whether this mistrust has always been there, and whether by consistently being 'good', corporations can ever be trusted again.

Anyway, as well as the Matt Damon film, we can also look forward to Gasland II, the sequel to the much discussed Gasland movie by Josh Fox. Gasland was shredded by a few organisations, let's see what happens with the sequel.

Finally, and most interestingly, there's Fracknation. Fracknation is a crowdsourced film, meaning that the money to make it was raised from many small, individual donations. A total of 3,300 people donated an average of $60 to fund the film. The purpose of fracknation was to rebut Gasland, and show the views of the majority of people in fracking areas who support the industry for the economic boost (much like Dimock Proud). Going back to the 'little-guy-v-nasty-corporation' meme, it's interesting that these are the little guys speaking (and putting money into a film). Clearly, it's a bit more complicated than that.

I'll leave you with another video (while I go start filming my movie......)