Science outreach is becoming a big deal - there's a huge appetite for it from the general public. There can be little doubt - science is now cool!

This week I had the privilege to attend the 3rd Bristol Science Show-Off - an opportunity for science-lovers to gather in a boat (well, a boat masquerading as a pub but which does excellent beers) and listen to 10 brave scientists spout off about their favourite sciencey-tidbit.

Notably, well before kick-off the place was pretty much full to the rafters (probably too full for the HSE's liking one imagines), I wouldn't have had a seat had I not been acccidentally roped in to do tech support (by virtue of being tall enough to hang the projector screen up, and happening to have a laptop with me).

The night began with Bonnie Buckley explaining how one tells alligators and crocodiles apart, and what not to do when in the presence of a wild one - mainly, don't feed them, or them may decide that your kids also represent food. In fact, don't feed them with your own body parts either seems like sensible advice. This was followed by Matt Tosh, who showed us the science (pyromania really) behind firework displays, and the importance of not blowing everything up at once. Ceri Wyn-Thomas then brought up a traumatic maternal childhood prank (her mother convinced her that when she was 7 she'd shed her skin like a snake) to talk about ecdysis - how and why crabs, lobsters, spiders etc shed their skins, with much 'stripping-off' innuendo. Karl Byrne talked us through the longest-running science experiments in history, including some fields in Rothamsted and the Queensland Pitch Drop. As fascinating as watching paint drip and/or watching grass grow. The first half finished off with Mark Lewney using an electric guitar to play us through a typical Horizon show - a one stop guide to structuring a science show.

After the break, Emily Coyte and Audrey Nailor explained how cute lolcatz pictures are in fact science because they are memes, while Becky Holmes showed a slightly unhealthy fascination with all things firemen (so we had one talk starting fires, and one putting them out), including proving definitively that a randomly selected audience member looked hotter after donning a fireman's uniform. Things got a little sticky when Joe Wright gave a 'seminal' talk using his microscope to image certain human cells, before Neil Jerome reminded us all of the tricky business of statistics, and the importance remaining scrupulously impartial when we conduct experiments, rather than trying to bend statistics to our will. This included several examples of scientific papers when authors have failed to heed the above advice, seeing what they want to see rather than what the data actually show. An important reminder for us all! Finally, the night closed with Ross Exton building a composite mega-animal (for the record, body of a cheetah, ears of an owl, nose of a mole, eyes of a mantis shrimp, punching forelimbs of a mantis shrimp, and jaw of a crocodile). A word also for the compere Steve Cross who did a great job, witty throughout.

Nothing about shale gas in this post, but I really felt the need to comment on what was a really enjoyable evening. It's really encouraging that so many members of the public are keen to engage with science, and I hope that such events become a regular fixture. It's up to us scientists to get out there and talk science!!

Email ThisBlogThis!Share to TwitterShare to FacebookShare to Pinterest
Labels: The crazy world of academia, The day job

Big news for UK shale gas this week, as the Institute of Directors has released their report into the economic impacts of UK shale. This report focuses on how shale gas development will affect the UK economy, rather than safety aspects, which is a welcome change because it seems we spend a lot of time talking about potential negative impacts of shale gas, without remembering that there are significant gains to be made.

Here are the key headlines from the report:


The IoD’s previous report, published last year, looked at the number of jobs that shale gas production could potentially create. We now believe that it could be higher still. According to the detailed scenarios presented in this report of a potential production phase, investment could peak at £3.7 billion a year, supporting 74,000 jobs – not just for geologists and drilling specialists, but for construction workers, truck drivers, cement manufacturers, water treatment experts, and people working in local retail and service industries.

Jobs could be created in parts of the country that need them most – over the last decade, the proportion of working-age people receiving at least one out-of-work benefit has averaged more than 15% in the North West, compared to less than 9% in the South East.

Shale gas production, with tax rates of up to 62%, could generate significant tax revenue, helping to offset a predicted future tax gap of 1.25% of GDP from lower Fuel Duty and North Sea receipts.

Far from a “dash for gas”, the Department for Energy and Climate Change expects overall gas demand, for heating and industry as well as electricity, to remain roughly flat over the next two decades. This is consistent with carbon reduction of 45% by 2025.  But 76% of the UK’s gas is likely to be imported by 2030, costing £15.6 billion. In our central scenario, shale gas production could reduce gas imports to 37% in 2030, and the cost of imports could fall to £7.5 billion.

I think this is a key point to keep in mind. At least some proportion of shale gas opposition derives from a concern that shale gas will displace renewable energy on the grid. In fact, the ideal for shale gas is that it replaces gas that we currently import from the middle east. As an example, renewable energy installation has boomed in the US in the last 5 years, despite (or even in tandem with) the shale gas boom. Producing gas domestically rather than importing is beneficial for many reasons: it boosts our economy, rather than that of Qatar; it improves our energy security; and potentially the shorter transport distances mean that this gas has a lower carbon footprint than imported LNG (which has to be compressed and shipped). The IoD estimate that shale gas could replace half of our imports, saving £15billion, and as noted in the report, could reduce our greenhouse gas footprint.


According to the Committee on Climate Change, if production is well regulated, shale gas can have lower emissions than imported gas. If shale gas supports the production of chemicals and other goods in the UK, global emissions will also be lower, as UK industry is very energy-efficient.

Natural gas has great potential as a transport fuel, particularly for lorries and buses. In the US, 19% of municipal buses run on natural gas.

An abundance of gas could also encourage an increase in gas-fuelled buses and lorries, which have lower CO2 emissions than diesel.


Only a small amount of land is needed for shale gas development. One 2-hectare site could potentially support 40 horizontal wells and supply enough gas to power 747,000 homes at peak production. 100 such sites would take up just two square kilometres of land, and could supply around one third of our gas needs at peak.

This is a very interesting conclusion. One of the principal concerns about shale gas is the surface footprint - that huge swathes of the UK countryside will be covered by wellheads. The UK Bowland shale is remarkably thick, much thicker than most of the US shale formations. This means that a greater volume of rock can be accessed from single well points. Operators are envisaging so called 'stacked laterals' (shown below), where multiple lateral wells are drilled on top of each other. This will substantially reduce the surface footprint of developments for a given volume of gas produced, because rather than 6 wells per pad, suddenly you are looking at 12, 18, 24 wells per pad.

As often mentioned on this blog, water use is a non-issue for the UK: water companies lose more water every day in pipeline leakages than needed for fracking.

The report finishes by highlighting the likely barriers to UK shale gas development. They recommend that some of the economic benefits of production are funneled directly to local communities, and that more is done to engage local people. Some of the above headlines will help I'm sure. 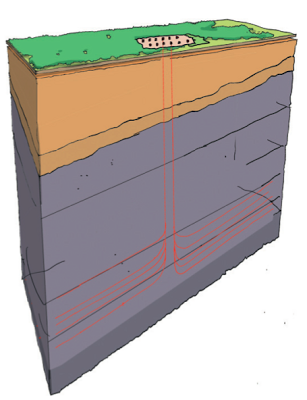 This is a quick post to comment on Bristol University's open access policy in the wake of new guidelines from RCUK. In essence, any RCUK-funded research must now be open access, either green or gold (green is where the paper is archived in a repository of some kind, gold is where an article processing charge (APC) is paid to the publisher so that they make the paper openly available).

For now I will reserve comment on whether open access is overall a good or bad thing - it is happening regardless. For any UK researcher it is vital that their papers are considered to be REF-eligible, and this means that they must be open access.

However, as anticipated, I think that the costs have been hugely underestimated. Bristol Uni has put aside a block grant of £500,000 to fund APCs of gold open access articles. However, a quick perusal of the University publications database reveals that, in 2012, the Faculty of Science produced 1,100 academic journal papers. The university as a whole produced more than 3,000. Assuming an average APC of £1,000, that means that the cost of the output from the Science Faculty alone is more than £1million, and from the whole university is more than £3million.

So I'm not sure how they worked out that £500,000 would be sufficient to cover this. Of course, it presumably means that there will be competition for this money, and is it likely that I, as a young researcher without a lot of clout compared to the senior professors and staff at the uni, will get a piece of it? In turn, does this mean that if I want my papers to be REF-eligible, will they have to be published in journals other than the ones of my choice? I suspect so, and I am concerned at the impact that this will have on my career (the career of any young scientist is controlled disproportionately by which journals he/she is able to get papers published in).
Posted by Dr JV at 06:36 1 comment: Links to this post