Conventional vs shale: what's the difference?

Oil and gas production is a complicated business. To get those molecules of hydrocarbon from the microscopic sandstone pores kilometers underground all the way to your car's petrol tank or your home's central heating system takes a huge amount of engineering. Shale gas extraction is no different in this respect - in fact it requires additional stages of engineering on top of what is required for normal gas and oil extraction. So I figured it would be of interest to look at what is different in shale gas compared to conventional, and what is the same.

Drilling
Wells drilled to extract conventional HCs are pretty much identical to shale gas wells. They are drilled in the same way, cemented in the same way. Horizontal wells are now common in conventional production, just like they are in shale gas. Check out the map of the Weyburn oilfield (Canda) below - each line is a horizontal well bore, some of which produce oil, some of which inject CO2 to help force the oil out. Conventional and shale wells have pretty similar risks in terms of wellbore integrity and gas leakage. 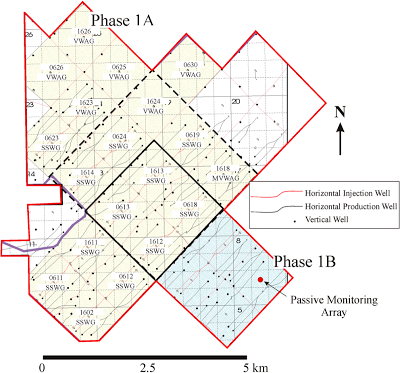 
Hydraulic Fracturing
This is one of the big differences between conventional and shale gas. Although HF is often used in conventional gas fields, it is not usually on the same scale as for shale gas. So, what extra risks does the HF process itself entail? Evidence is pretty clear that the fractures that are created are not providing contamination pathways for gas or nasties to get back to the surface: the fractures created are simply too small and too deep - not even the most ardent anti-frackers are arguing this I don't think. Of course, hydraulic fracturing uses water, some of which comes back up to the surface - I'll talk about this a little more below.

Number of wells
Usually, you would expect to have fewer wells in a conventional field than for a shale gas field. This isn't always the case - look at the number of wells at Weyburn, above, or the Jonah gasfield (below). However, as a general rule, expect more wells for a shale field. 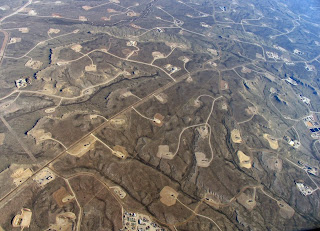 Water Usage
Firstly, water usage. Some water is required to drill a well. I'm not sure how much, but it rarely seems to be an issue for conventional wells. On top of that, hydraulic fracturing also requires 1-5 million gallons (about 10,000-20,000m3, or 4-8 Olympic swimming pools) of water. 5 million gallons sounds like a lot, but it's all about the context. In the UK, 2,559 megaliters of water are lost through leaks in our water system every day. That's 676 million gallons (or 2.5 million m3, or 1000 Olympic swimming pools), enough to frack more than hundred wells every day! If we improve leakage rates in our water system by 1%, we'd have enough water to spare to frack a well every day. So water usage isn't really an issue - if you're worried about the next hosepipe ban, get on to your water supplier to fix their leaks.

Produced water
One of the issues with fracking is that the injected water comes back up the well. Even if the latest CleanSTIM fluids are used (using only ingredients available for use in the food industry), the returning fluids are contaminated by their time in the reservoir, picking up NORM, heavy metals and organic compounds. When the water is returned up the well, it has to be dealt with.

But what about conventional HC production? Most conventional reservoirs have what is called residual water saturation - the part of the rock's pore space that is filled with water rather than hydrocarbon. When the reservoir is produced, the water comes up along with the oil and gas. This water has been in contact with the oil, gas and rock for millions of years, so like the fracking water it may be contaminated with NORM, heavy metals and organic compounds, and it must be dealt with. It's not actually an issue I'd given much thought to until now - having a blog is sometimes great for making you research something you otherwise hadn't considered. As far as I can gather from this page, it appears that in the North Sea this produced water is treated on site and then dumped into the sea. This was quite surprising to me - that it was easy enough to clean the water on-rig to a standard where it can be put back into the sea! Onshore (at Humbly Grove for example) it would appear that this water is re-injected into a deep lying aquifer (I couldn't find out anything about whether it was treated first or not).

So dealing with produced water would appear to be as much an issue for conventional production as it is for shale gas. The main difference is that for shale gas all the water is produced immediately in the days after the frack, while for a conventional field it is produced continuously through the life of the field.

Seismicity
Shale gas extraction has generated a couple of small earthquakes near Blackpool. However, induced seismicity occurs in conventional reservoirs too (read the abstract of this scientific paper, or the whole thing if you have access). So again, as much an issue for conventional production as for shale gas.

Surface Impact
I'm sure many of you enjoyed the good debate between myself, 'John' and 'Anonymous' on my previous post about the surface impact of shale gas extraction. In as much as shale gas fields will probably have more wells than conventional fields, there will be a bigger surface impact. Conversely, however, shale gas wells will be capped with Christmas trees, which are fairly low impact in comparison with a nodding donkey which might be needed for a conventional oilfield. Examples of both are below. 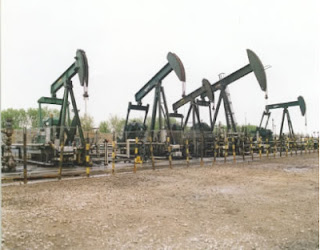 Oilfield nodding donkeys (above) and gas production 'Christmas Tree' (below): 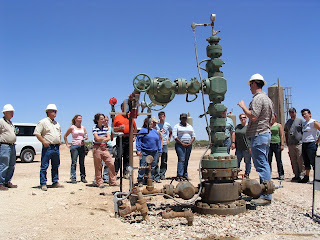 All of this leads me to a question that I'd like to ask those who are opposed to shale gas development. Would your opposition be as fervent if new conventional gas fields had been found under Blackpool, rather than shale gas?

Shale gas, and fracking, sounds scary in comparison with the conventional production that we've had for a hundred years. However, when you break things down and look at the major objections to shale gas, are they much different to conventional operations? Wellbore integrity (and the risk of gas leakage from wells) is as much an issue for conventional gas as it is for shale. Dealing with contaminated produced water is always an issue for conventional reservoirs, much as it will be for shale. Induced seismicity happens for both conventional and shale. Shale gas will likely have more wells, and so a greater surface impact, than conventional gas, but this is an incremental increase, not a game changer, while much of the related infrastructure - pipelines, processing facilities etc - will be similar. Intellectual honesty would dictate that if you are opposed to shale gas extraction for these reasons, you should be equally opposed to conventional onshore gas extraction.

Given this, would a better description for those opposed to shale gas development in the UK be 'anti-onshore gas development', rather than 'anti-fracking' or 'anti-shale-gas'?