Image of the day: shale development and water stress

Several images this week. This images show "water risk" in the USA for a number of industries, as computed by the World Resources Institute. The more red the colour, the greater the water risk. 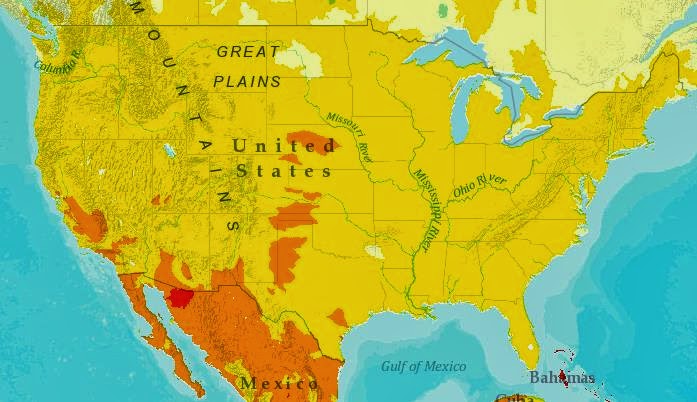 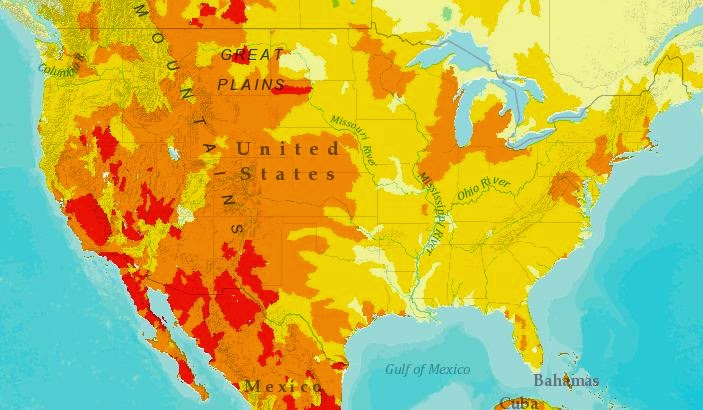 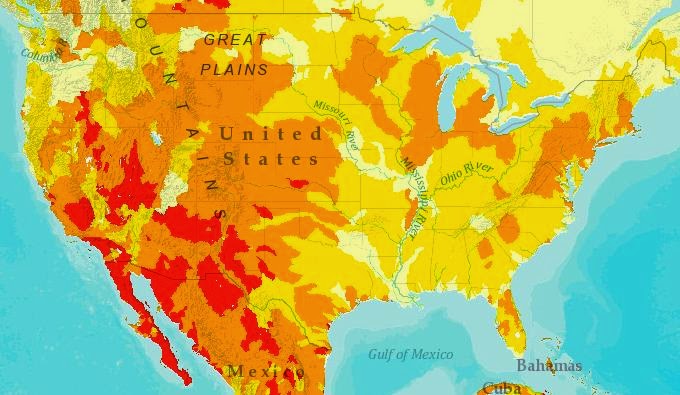 And the construction industry? 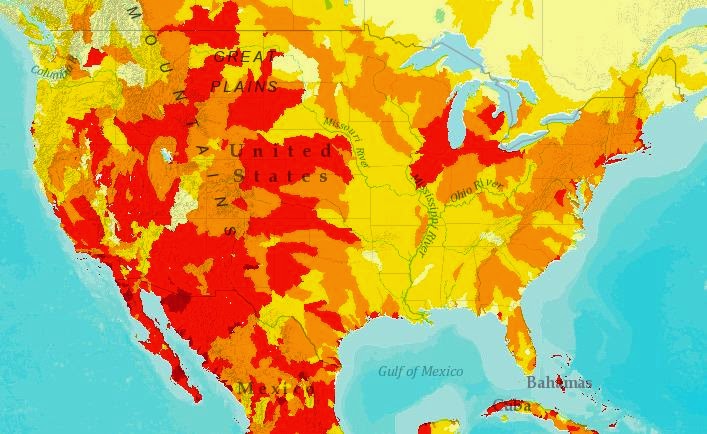 The food and beverage industries? 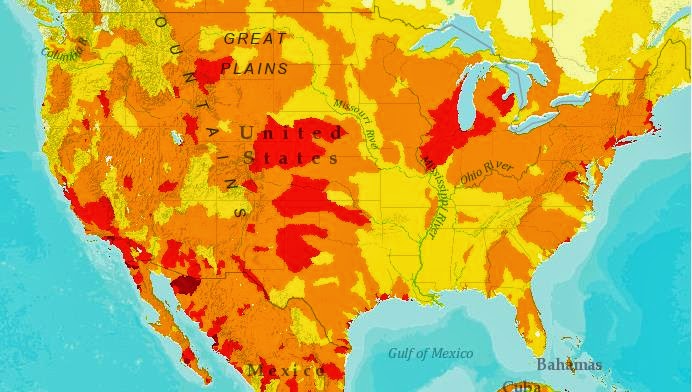 And the textile industries? 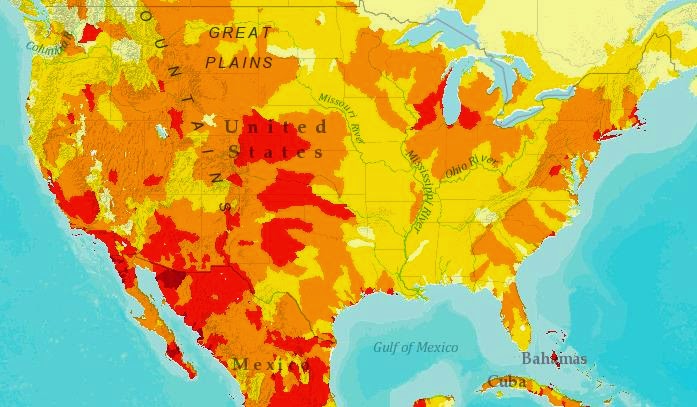 The conclusion? While shale gas does have the potential to use a lot of water, but the risk it poses is substantially smaller than many other existing industries.

Email ThisBlogThis!Share to TwitterShare to FacebookShare to Pinterest
Labels: Image of the day, Water

Image of the day: Hydraulic stimulation at Cotton Valley

Microseismic monitoring technology allows geophysicists to map the fractures as they are created during the stimulation process. This image shows a map of the fractures created during stimulation at Cotton Valley (an early East-Texas tight gas play). This shows the extent of a typical stimulation zone - a few hundred meters either side of the injection point, and no more than 50m above the injection depth. The black triangles show the geophones used to collect this data. 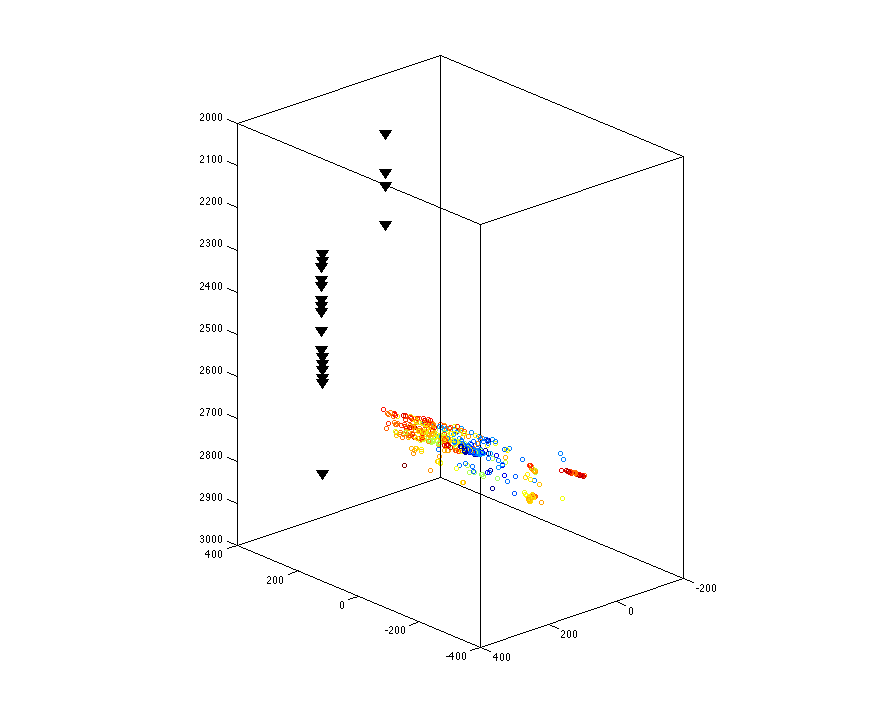 Email ThisBlogThis!Share to TwitterShare to FacebookShare to Pinterest
Labels: Image of the day, microseismic monitoring


The Associated Press reports several earthquakes in eastern Ohio that have been linked to shale gas extraction. If true, this represents the 4th time that hydraulic stimulation in shales has been associated with seismic activity. This follows Preese Hall, Lancashire, the Horn River Basin, Canada, and Garvin County Oklahoma.

Note that it is important to differentiate between earthquakes triggered by hydraulic stimulation (i.e. fracking) and those triggered by underground disposal of large volumes of waste fluids, which is not being considered in the UK. It is the underground waste disposal wells that have been attributed to the increase in mid-continental seismicity seen in the USA.

Attributing cause and affect with respect to earthquake triggering is a difficult challenge. Frohlich and Davis (1993) came up with a series of 7 questions that are still commonly used to attribute "induced" earthquakes. These are:


However, without good quality seismic data, these questions can be difficult to answer.


The "Summary for Policymakers" of the final part of the IPCC 5th Assessment Report has been released today. The IPCC AR5 is split into 3 volumes: the first focused on the physical evidence for climate change; the second on the impacts of climate change. This final part focuses on what we can do about it.

Unsurprisingly, the report calls for substantial increases in proportion of electricity generated from renewable sources. It also calls for increased levels of nuclear energy as "a mature low‐GHG emission source of baseload power".

Of most interest to this blog is the paragraph on natural gas:


GHG emissions from energy supply can be reduced significantly by replacing current world average coal‐fired power plants with modern, highly efficient natural gas combined‐cycle power plants or combined heat and power plants, provided that natural gas is available and the fugitive emissions associated with extraction and supply are low or mitigated (robust evidence, high agreement). In mitigation scenarios reaching about 450 ppm CO2eq concentrations by 2100, natural gas power generation without CCS acts as a bridge technology, with deployment increasing before peaking and falling to below current levels by 2050 and declining further in the second half of the century (robust evidence, high agreement).

This is a very strong statement. Not only must natural gas electricity generation stay at current levels, but its deployment must increase in the near term, with the amount of natural gas-fired power generation only returning to and dropping below current levels by 2050, almost 4 decades from now. This is true regardless of whether carbon capture technology is deployed at gas-fired plants. Development of CCS would further increase the need for gas:

Note that the report categorises how strong the evidence, and the degree of consensus, for each statement it makes. These statements on natural gas have robust evidence, and a high level of agreement. 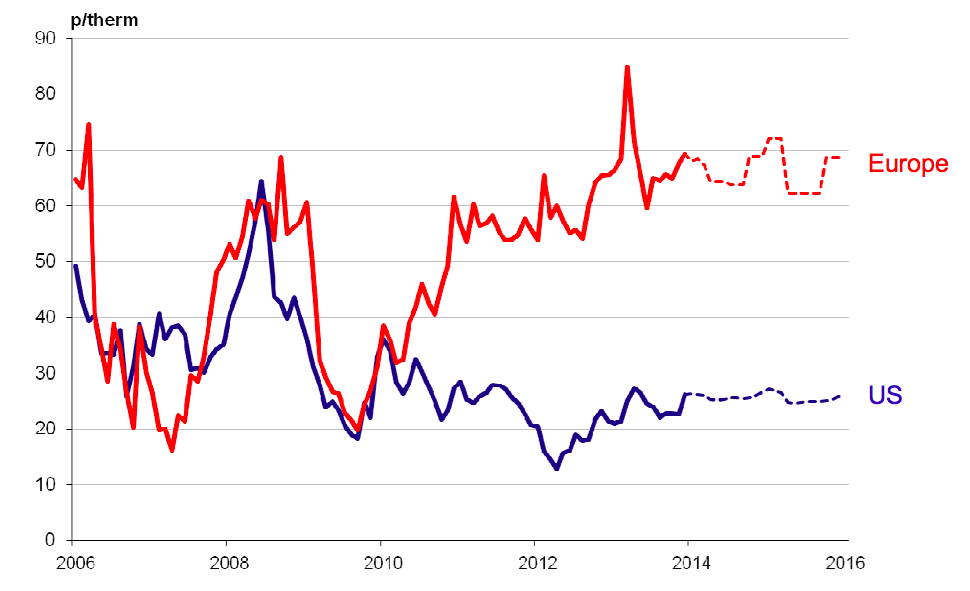 Caroline Lucas, Green MP: "It's not that fracking itself is necessarily worse than ordinary gas extraction"

An interview in the Guardian with Caroline Lucas, the UK Green Party's only MP, makes for interesting reading. She's currently awaiting trial for her role in the protests at Cuadrilla's Balcombe drilling site.

She has some interesting comments about shale gas development in the UK:


For Lucas, the big problem with fracking has nothing to do with the risk that it will cause earthquakes, contaminate the water table or pollute the soil. In fact, she thinks it possible that stringent regulations could minimise those risks. "It's not that fracking itself is necessarily worse than ordinary gas extraction. It's the fact that we're just about to put into place a whole new infrastructure for a whole new fossil-fuel industry, at exactly the time when we need to be reducing our emissions." The problem, in other words, is climate change.

I've long been of the opinion that, at the upper levels of various NGOs and political groups, the primary opposition to shale gas is derived from a the climate change angle, not local pollution. The scare stories about earthquakes and pollution are a stalking horse for the real issue. Climate change concerns are unlikely to mobilise local support in any significant way, hence the need to exaggerate local impacts in order to foment local opposition. It's refreshing that Caroline Lucas has come clean about this.

Image of the day: CO2 emitted, and CO2 reserves

Shale gas, where it displaces coal in the electricity generation mix, presents a substantial reduction in CO2 emissions. These two images highlight the state of affairs in terms of global CO2 budgets. The first image shows CO2 emissions from fuel source and from country (in 2008). Clearly, Chinese and American coal are by far the biggest culprits. The second shows an estimate of the amount of CO2 embedded in fossil fuels as yet unburned. This presents us with a clear choice - if we are to continue burning fossil fuels, we should be choosing to burn gas. 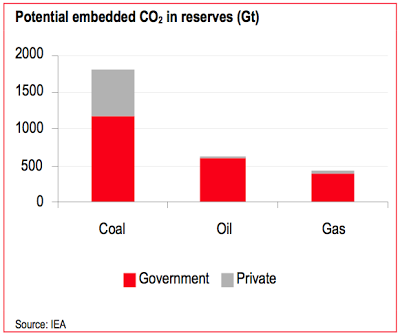 Email ThisBlogThis!Share to TwitterShare to FacebookShare to Pinterest
Labels: climate change, Image of the day

Image of the Day: Nat Gas vs Renewables in the Developing World


Imagine you had $10 billion to invest in providing electricity to people in the developing world who currently go without.

The lack of electricity in the developing world is a major issue. Almost 3 billion people burn twigs and dung to keep warm and heat their food. This causes indoor air pollution, which has been estimated to cost over 4 million lives per year. Electricity allows refrigeration to keep food from spoiling and rotting. Refrigeration is also vital to keep certain medicines in good condition. Electricity powers computers and phones that allow people in developing countries to connect to the world.

The Center for Global Development have worked out how far your $10 billion would go if you were to use renewables, or were to use gas, or some mix of the two. How many people could you connect to an electricity supply? 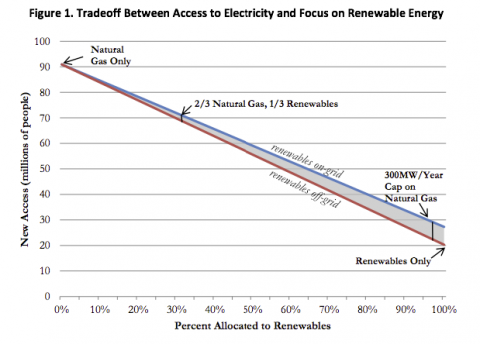 Email ThisBlogThis!Share to TwitterShare to FacebookShare to Pinterest
Labels: climate change, Image of the day


In this week's news, the residents of Balcombe are looking to raise funds to install solar panels to power the village. The initial plan is to raise £300,000 for enough panels to power 7.5% of the village, with the intention of continuing as far as possible towards 100%.

The regressive way that renewable projects are currently funded is something that irks me. We spent time in Balcombe last year deploying seismometers during Cuadrilla's drilling, and it's a typical well-heeled home county village. Current solar subsidies have the effect of taking money from the average bill-payer, such as myself, who is a long way from owning any property at all, let alone a property suitable for solar panels, and handing it on a plate to wealthy landowners: people who already own buildings with large roofs on which to install panels.

That issue aside, this provides an excellent opportunity to compare the footprint of different energy sources. While the group itself don't make the connection, the way the story has been reported gives the impression that the solar developments represent in some way an alternative to the drilling conducted last summer, with a significant portion of the village opposing Cuadrilla's plans to conduct flow-tests on the well.

With that in mind, how do the two plans stack up in terms of the energy they might provide?