Cuadrilla, Elswick and some spectacular hypocrisy from Frack-Off

Let me begin by wishing you all a happy Christmas - I hope you ate lots of turkey, those little sausages with the bacon wrapped round (my favourite) and Xmas pudding!

But now, to business. It has slipped under my radar until now, but as well as the drilling sites on the Fylde Peninsular, Cuadrilla are the proud owners of a small gas well at Elswick, a small town on the Fylde. The question is, why?

The may be many reasons - for example the sale from Independent, the previous owners, may have included geological or geophysical data that could have been beneficial to Cuadrilla. However, it wouldn't be surprising if, as surmised by Frack-Off, a major element in the sale was the use of Elswick for PR purposes.

You can see on the Cuadrilla site a couple of images of the site. The well-head is capped by a 'Christmas tree', about the size of a person. The site can be easily concealed with a medium-sized hedgerow. This is what a shale-gas drilling site will look like once the drilling and fracturing stages are completed (so about 6 months to a year after drilling begins). So owning this site, and having photos to plaster all over the web will provide a useful PR opportunity for Cuadrilla.

Also, note that the well has been hydraulically fractured. Not to the same extent as what is needed to produce shale gas, but it provides an idea of a typical UK onshore gas example, a well has been drilled, fracked, and has produced gas for 20 years without any environmental incidents of any kind. Certainly a useful example to have, even if shale gas extraction will be on a larger scale than this. If 50% of wells fail after 20 years, as claimed by Josh Fox in The Sky is Pink, I guess this must just be one of the lucky ones.....

I did rather enjoy Frack-Off's spectacularly hypocritical article on the Elswick well. It begins with a reasonable enough description of the Elswick site, and Cuadrilla's motives for buying it. However, for Frack-Off, the fact that it is a single well makes the example meaningless, and they end the article with the usually predictable Cuadrilla-bashing.

Of course more wells will be needed to produce a shale gas reservoir. Probably one well-head every few miles. What the Elswick example is good for though, is to show what one of these well-heads will look like. Could we handle an Elswick every few miles? 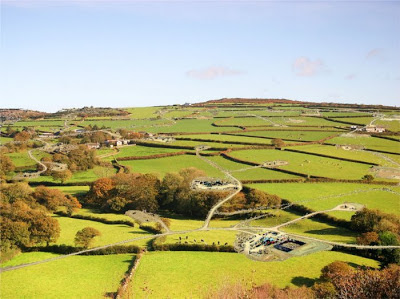 It's photo-shopped from this photo from the Jonah Gas field, Wyoming, overlaying some British countryside onto this image: 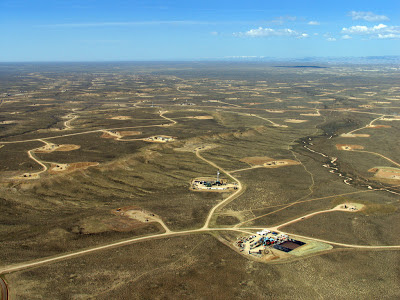 The Jonah Field is a tight gas (i.e. sandstone) field developed in the early 1990s. That is before the technology to drill horizontal wells had been developed, so of course there are a lot of wells. Shale gas in the UK would look nothing like the Jonah field.

If Frack-Off don't like Cuadrilla's use of Elswick for PR on the basis that it is a single well site, while shale gas would use many, it's surely pretty duplicitous for them, in the same article, to use an image from a field developed using obsolete 1990s technology for their own PR. It all seems spectacularly hypocritical to me......

Update 28.12.2012: In case you can't be bothered to click the link, here's the image of the Elswick Christmas Tree:

Update 2, 28.12.2012: Rather than using old, 1990 gas wells (either Elswick or Jonah Field), perhaps we'd all be better off using some up to date pictures. Perhaps, for example, from the Pennsylvania shale gas fields currently being developed. Here are a couple of links to aerial photo tours of affected areas: