I talked in my last post about seismicity (i.e. earthquakes) induced by subsurface fluid injection. In fact, there are many human activities that have the potential to cause earthquakes, including:
So it seems that whether you are a climate-change denier who just wants to keep on mining coal and burning oil and gas, an advocate of tech-based solutions like CCS and nuclear, or a total greenie who sees our future energy needs met by geothermal energy, hydro-electricity, and other renewables that require efficient energy storage mechanisms (i.e. lots of pumped storage reservoirs), it seems that your preferred energy source comes with a risk of generating earthquakes.

Before I get into this, a word on earthquake magnitudes (skip this if you already know about magnitudes). Most people are familiar with the Richter magnitude scale running from 0 (i.e. very very small, basically undetectable) to about 9 for the biggest quakes we've ever had. Most people are also aware that it is a logarithmic scale, meaning that an M2 event is 10 times as large as an M1 event, not twice the size. In fact, the Richter scale, which was essentially an arbitrary scaling function, has largely been supplanted by the Moment Magnitude scale, which relates more directly to earthquake physical processes. More specifically, Moment Magnitude is calculated from the seismic moment (Mo), according to:

This equation was deliberately scaled so that it followed the Richter scale, so that seismologists (and the public) could still understand magnitudes in the same way. In turn, the seismic moment is defined by the size of the rupture during the earthquake, according to:

where G is the shear modulus of the rock, A is the cross-sectional area of the earthquake rupture, and D is the average dislacement that one side of the fault moves relative to the other. So you can see that, if there is no limit to the size of a fault (which controls the rupture area), there is no limit to the maximum magnitude that an earthquake can be. In reality, however, the the thickness of the earth's crust probably imposes an upper limit on the size that an earthquake can be, which is why even the largest earthquakes (on Earth at least - who knows, a planet with a thicker crust could probably have larger earthquakes) don't ever seem to get much bigger than M9.

Now, back to human activities triggering earthquakes. It's unlikely that any of the activities listed above could trigger a crustal-scale fault capable of triggering an M9 earthquake. So what controls the maximum magnitude that could be triggered by mankind's operations? In my last plot I showed the graph used by Art McGarr to explain induced seismicity in the USA and around the world: 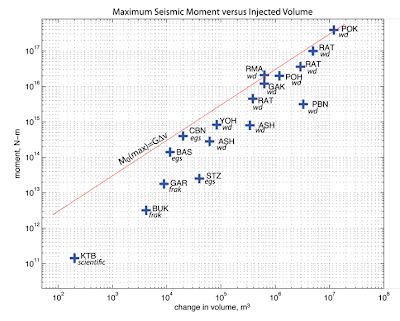 McGarr adapted the long established McGarr equation, which originally stated that the total seismic moment released is proportional to the volume of rock extracted during mining (multiplied by G):

This equation was soon adapted to cover seismicity induced by fluid removal and/or injection, with VolRockMined being replaced by dV: the volume of fluid injected. The physical basis for doing so has always been slightly dubious, but empirically it seems to do a reasonable job. After the recent induced seismicity incidences, the McGarr equation has been modified again: now G dV gives not the total seismic moment released, but the magnitude of the largest event alone. This modification should only be strictly true in situations where the single largest event completely dominates the total seismic moment released. So we end up with the modified McGarr equation for injection-induced seismicity:

This is the equation plotted in the above figure, and you can see that it does a good job of fitting the data. But the key thing to note with the McGarr equation is that it is empirical, it does not have any real physical basis - i.e. it is something that is observed, but it doesn't really explain WHY the maximum magnitude should be controlled by the volume of fluid injected (instead of, say, the rate of injection or the change in pore fluid pressure).

A new model for Mmax has been developed by Serge Shapiro of the Freie University, Berlin, which I find very interesting. The Shapiro model suggests that Mmax should be controlled by the size of the fluid-affected zone.

A large earthquake can't just happen anywhere - a pre-existing fault plane must be present on which the quake happens. As an approximate scaling, the maximum earthquake magnitude created by a circular shaped fault with radius r can be approximated as:

If a fault is significantly larger than the radius of the injection zone, only a small portion of this will be influenced by it, and this will not be sufficient to trigger rupture. Failure will only occur on faults where the majority of the fault is influenced by injection. As a result, we have a reason to scale Mmax with injection volume. Do the maths and you end up with:

In the plot below, the green circles show Mmax for the McGarr data, which I have calculated using the Shapiro model. You can see that, much like the McGarr model, they fit pretty well. So do we now have a better model to explain Mmax? 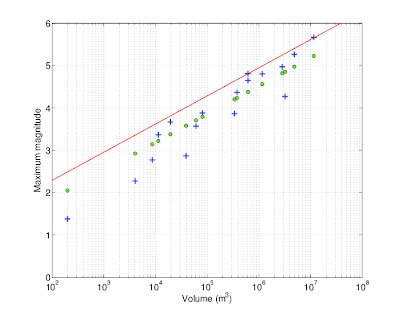 Unfortunately, I don't think we do. When you look in more detail at the induced events, you can see that some of the key assumptions of the Shapiro model are not met. The Shapiro model requires that events occur within the immediate radius of the injection zone. The figures below show induced seismic events from Arkansas, Oklahoma and Colorado, with the injection wells marked. 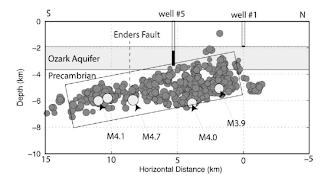 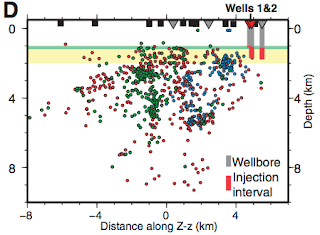 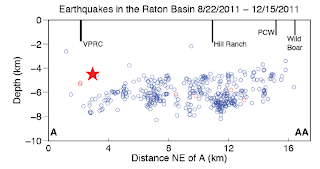 A common theme is that the majority of events occur well below the injection point. Perhaps some of the initial seismicity is triggered in the injection interval, but the majority of the triggered faults lie outside the zone that is directly influenced by injection. The Shapiro model explicitly assumes that the triggered faults lie almost completely within the injection-influenced interval. I think that the Shapiro model is a great attempt to simplify a difficult problem, but to me it seems that more complicated effects involving stress transfer through many layers of rock are acting, and need to be taken into account, to understand the triggering of these faults.

This takes us back to the title of this post: predicting Mmax is still a conundrum. The McGarr model seems to fit the data, but it is only empirical, there is no real physics behind it. The Shapiro model also fits the data well, and has a physical mechanism of control. However, the suggested controlling mechanism doesn't stack up when the events are studied in more detail.

A physically realistic, empirically verified model to predict Mmax still eludes us. We are usually able to  explain post hoc why a particular operation triggered an event. However, we are still not very good at predicting in advance whether a project will induce larger seismic events. If you can come up with a better method, then do get in touch, because a solution will be extremely valuable in a range of industries as discussed above.

Email ThisBlogThis!Share to TwitterShare to FacebookShare to Pinterest
Labels: Earthquakes, The crazy world of academia, The day job