Update (1.8.2014): It seems that the Geological Society are very unhappy about Prof. Smythe claiming to be a chartered geologist. The Geol Soc state that this title requires "proof of continuous professional development", with the clear implication that they do not believe Prof. Smythe meets this requirement.

Glasgow University are also unhappy about being associated with the professor. Paul Younger, Professor of Energy Engineering at Glasgow stated:


"He has published nothing on [shale gas] in any proper scientific forum — no doubt because he knows he would never get past peer review with his pseudo-scientific scaremongering. He falsely claims to be a chartered geologist. That’s fraudulent. It’s wilful untruth. I am concerned about the damage to the reputation of the university by someone who never fails to use his university affiliation.”


Original Article:
This post is a comment on the critique of Cuadrilla's Balcombe drilling plans made by David Smythe, Emeritus Professor of Geophysics at Glasgow University. The key points of this critique are as follows:


My comments are as follows:

It is argued that the lack of 3D seismic data means that it will not be possible to keep the horizontal drill within the target micrite formation, and that it will not be possible to identify if/when small faults are intersected. This criticism ignores one of the key technological developments of the last 20 years, which is closely associated with the development of horizontal drilling. That technology is called "Geosteering" (also known as "Logging While Drilling"). For more detailed info on these techniques I'll have to hand you over to google for now, but this article provides a decent explanation.

Essentially, geophysical measurements are taken continuously at the drill tip. This data tells drilling engineers what rocks they are in. They use this to guide where the drill goes, allowing them to stay within the target formation. If you read the linked article, you'll note that it even allows engineers to see when they've intersected faults. Geosteering is common practice when drilling horizontal wells in the Barnett and the Marcellus, the two most significant shale plays in the US.

I'll include here some comments on a couple of issues raised on Prof. Smythe's website, which don't appear in the linked slides but form a key part of the conclusions outlined above. In the comments on faulting in US and European basins, he argues that "faulting is almost non-existent in the US basins". This isn't the first time I've heard this suggestion, and I don't know where this meme has come from. The eagle-eyed among you will have spotted this comment in the linked Geosteering article:


"In some areas in Pennsylvania, the geology is very complex across some of our leases," Collins noted. "There are very large thrust faults"

I've even had the pleasure of seeing them myself - they tend to show up in microseismic data. You can see an example in this paper, and below is another microseismic dataset clearly showing the interaction of the stimulated stages with a fault: 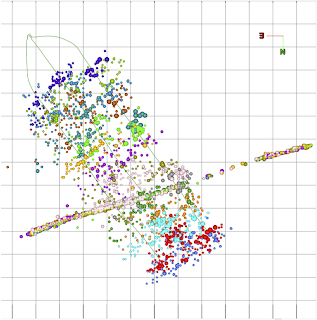 Faults are clearly not "almost non-existent in the US basins". Prof. Smythe criticises the well-known Warpinski-Fisher paper that looked at hydraulic fracture height growth for its failure to include fault data. However, the Warpinski-Fisher paper explicitly includes data from examples when hydraulic fractures have intersected faults (see slides 7 and 11 in this presentation, for example), providing clear evidence that stimulation does not create pathways from deep-lying reservoirs to shallow potable aquifers, even when faults are present.

I would also like to address the comment that "faults do not normally act as seals". This is a misleading comment. It is true that when risking a potential reservoir trap identified on seismic data, the observation of faulting on the top of an anticline would present a risk, because with seismic surveys alone it is difficult to tell whether a fault might be sealing or not, and so whether there might be hydrocarbons present, of if they might have all leaked away over geological time.

However, it is not true to claim that "faults do not normally act as seals". Fault traps - where the geometry of faults and reservoir units serve to form a trap, instead of the traditional anticline domes - are a common method of trapping oil and gas. If that last sentence didn't make sense, there are plenty of pictures on google. Fault compartmentalisation - where sealing faults break up a reservoir and prevent fluids from flowing to the well - is a common problem in conventional reservoirs. You can read about a case example here. A particularly pertinent quote is "clay-rich lithologies (i.e. shales) are likely to reduce fault zone permeability (i.e. provide better fault sealing) more than clay-poor lithologies". We know from Conoco's drilling in the 1980s that oil is present in the micrite beds underneath Balcombe. This oil has been trapped there for hundreds of millions of years. This would suggest that, even if the Paddockhurst Park Fault does intersect the target micrite formation, it is not providing a transmissive pathway to flow.

Finally on the issue of induced seismicity. It is a misconception that if a hydraulic stimulation intersects a fault, it will inevitably create a "larger" earthquake (i.e. one that might be felt by humans at the surface, such as at Blackpool). Again, this is not the case, as documented in the microseismic examples above. It is not uncommon for stimulations to intersect small faults, yet incidences of felt seismic events are extremely rare amongst hundreds of thousands of stimulations. Although in some cases event magnitudes have increased slightly upon intersection with a fault, they remain well below the threshold that could be felt at surface. For hydraulic stimulation to trigger detectable seismic events, the stress state on the triggered fault must already have optimal orientation and magnitude - that is to say the fault must already be close to it's failure state. The majority of faults likely to be intersected during stimulation will not meet these criteria, hence the lack of detected seismicity during operations in the USA, and hence the conclusion by the expert report into the Blackpool earthquakes that they represent "exceptional" circumstances.

That said, as with pretty much any subsurface activity, there is a small risk of triggering small seismic events that should be considered. DECC have already put into place strict seismic monitoring guidelines to ensure that there is no repeat of events near Blackpool. Bristol University already has seismic monitoring stations deployed around Balcombe.

I agree with some of the more general suggestions made by Prof. Smythe: more geophysical surveys will enable us to better understand the subsurface geology. This is beneficial all around - enabling operators to maximise their production efficiency while regulators can minimise any environmental risk. I expect that as potential shale gas developments move through exploration into preliminary production phases, we will see more and more geophysical data being collected (as we have already seen a new 3D seismic survey collected on the Fylde). However, I strongly disagree with Prof. Smythe with respect to current operations at Balcombe - they are not likely to pose a significant risk in terms of fluid migration from depth or from induced seismicity.

Update (04/09/2013): Another example of hydraulic stimulation interacting with faults without adverse impact is the NETL hydraulic fracturing study, which received a lot of coverage last month. In this study, researchers injected tracer chemicals along with the fracking fluid. The shale layers were at 8,000ft depth, and an overlying layer at 5,000ft depth was monitored, looking to see if the tracers appeared in this overlying formation. The microseismic data from this operation has not yet been published, but reports seem to indicate that the stimulation intersected a fault. Even so, there was no evidence for the tracers in the overlying formation, nor were any larger-magnitude seismic events triggered.

Update (05/09/2013): Of course, I've missed perhaps the best example of stimulation intersecting a fault, in fact probably the best known one: the operations near Blackpool that triggered seismic events in 2011. This is the worst-case scenario - a stimulation intersecting a fault that is optimally oriented in the present day stress field, and close enough to failure that the stimulation is capable of triggering some of the largest seismic events ever seen during hydraulic fracturing in shales. Yet even for this worst-case example, the operators were able to produce gas from the reservoir, without any suggestion of shallow groundwater contamination from this fault.