Shale, renewables, and the importance of a carbon price


There are those who claim that exploiting shale gas will lead irrecoverably to climate change. Then there are others who have looked at what has happened in the US so far - where abundant gas has gone hand-in-hand with a renewables boom, displacing coal from the electricity mix and reducing US CO2 emissions, and argue that shale will be beneficial from a climate change perspective.

To know which is more likely to be the case, one has to be able to see into the future. Unless you have a particularly effective crystal ball, we do this by constructing economic models to try to predict how changes in supply, price and legislation will affect future economies.

I am not an economic modeller, but I know that they can get pretty complicated. Moreover, I know enough about modelling more generally to know that trusting the results from a single model can be risky - for added certainty you are best-off looking at multiple models and seeing if they all give you the same answer.

For this reason, a new study released by the Stanford Energy Modeling Forum is of particular interest. They have modelled the future effects of shale gas development on US, looking at a number of potential impacts, in particular changes in greenhouse gas emissions. Moreover, rather than just use one model, they have collated together the results from 7 different models and modelling teams.

Each model and team was asked to simulate a range of potential scenarios, including: 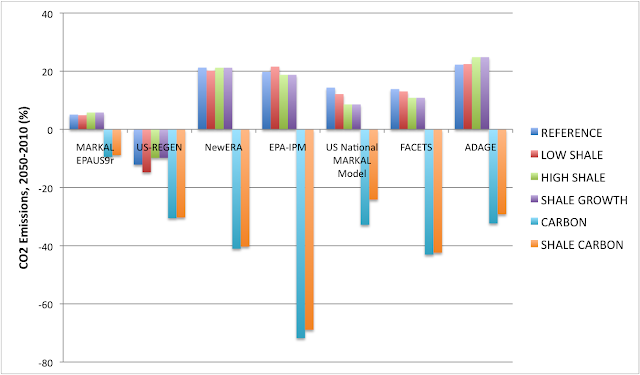 The first thing to note is that there are big differences in some of the absolute values between models - this is why trusting to one model alone can be a bad idea. However, the trends between the different scenarios are generally consistent between models, and that is the important result.

There are two scenarios that achieve significant reductions in emissions, and these are ones where a carbon price of $25 is imposed. If this carbon price is created, models predict a dramatic reduction in CO2 emissions, regardless of whether shale gas development continues as business as usual, or whether we see significant increases in shale production (shale carbon).

So, what is the moral of this story? It appears that whether shale gas is developed extensively, or is severely restricted, has little impact on CO2 emissions. To really make an impact, we need to put a price on emitting CO2 to the atmosphere. If climate change concerns you, chaining yourself to the front of a shale drilling site is a waste of time. This is time that could have been better spent trying to persuade government to introduce a carbon tax (or cap-and-trade, or an emissions trading scheme, or whatever your preferred method of pricing CO2 might be). I should add that it is particularly depressing when it is an elected member of parliament is the chain-ee, who's time really could be better spent arguing for a carbon price.

I've linked to this paper before, but there are those who argue that a CO2 price would actually be in the interests of natural gas companies (as it would favour gas over coal in the power sector, and gas over oil in the transport sector), and that harnessing the lobbying power of large and profitable gas companies might be the best way to go about gaining governmental acceptance for it. That certainly seems like a better use of time than chaining oneself to gate in Sussex.

Acknowledgements: A tip of the hat to Grant McDermott for pointing out this study to me - he discusses it at his blog here.