Cuadrilla's drilling at Balcombe attracted a lot of headlines. In a previous post I described (mainly by way of lots of holiday snaps) the deployment of seismometers by Bristol colleagues and I.

We have now completed our data analysis, and our results are available for you to read!

Hydraulic stimulation was not planned for this phase of Cuadrilla's operations. Therefore, we did not expect to see any induced seismic events. Nevertheless, we saw this as a good opportunity to attempt several objectives:

The first objective was simply about public perception. The average member of the public does not know much about earthquakes or about seismometers. They don't really understand magnitude scales, and they are not aware of the detection capabilities of modern seismometers. We hoped that the high levels of publicity surrounding Balcombe would give us a chance to help educate the public in these regards.

However, we had two main technical objectives as well. These relate to DECC's proposed traffic light scheme, whereby operators are required to stop if they trigger events above magnitude 0.0. Traffic light schemes are common for such operations - the Swiss in particular seem to like them. However, the minimum threshold here is far lower than anything used by the Swiss. Our aim is not to say whether this is appropriate or not, but its operation does pose some additional challenges, which our work seeks to address.

The first issue stems from the Gutenberg-Richter law, which states that the number of earthquakes (N) that occur which are larger than a given magnitude (M) is given by
log(N) = a - bM.
where a and b are measurable constants. The BGS gives values for a and b in the UK of 3.82 and 1.03, respectively. Using a magnitude of 0.0 (the lowest cutoff for the traffic lights), this relationship tells us that over 5,000 such events occur every year. The existing BGS seismic network is not capable of detecting these low magnitude events.

In order for the traffic light scheme to work effectively, we need to be able to distinguish between the 5,000 naturally occurring magnitude 0.0 and greater quakes that occur each year, and those induced by hydraulic stimulation. This requires us to have data about the naturally occurring events, which we do not currently have. Therefore, one purpose of our array was to begin to establish baseline measurements around a potential drilling site so that we can characterise any pre-existing, natural seismicity. This is but a small start, with only 1 month of background data. In an ideal scenario we'd want to have at least a year of baseline data.

The second purpose of our array was to measure typical levels of seismic noise and detectability thresholds for small, temporary arrays such as ours. The traffic light threshold of magnitude 0.0 is often at the threshold of detectability for surface seismometers. The detectability is controlled in part by the levels of noise on the seismometers. Although you might think the British countryside is a quiet place, there are many potential sources of noise, such as trains, roads, farm machinery, rivers. We wanted to see whether a small, relatively cheap array like ours would be helpful in administering the traffic light scheme, or whether more expensive microseismic monitoring methods are likely to be needed.

So, what did we find?
Well, the most obvious thing we saw was the train, made famous by local concerns about seismic impacts on the viaduct. We saw the train on all 4 seismic stations that we deployed. Here is an example: 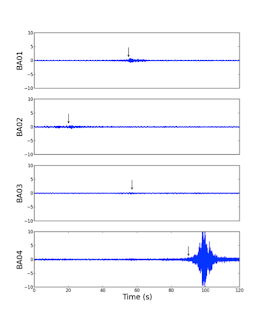 We wanted to compare the vibration from the train with typical earthquake magnitudes. To do this we used the UK magnitude scale, which is defined as
Ml = log(A) + 0.95log(R) + 0.00183R - 1.76,
where A is the amplitude of the signal at the station, and R is the distance between earthquake and seismometer. We modelled earthquakes occurring directly below the drilling site, and found that a quake with magnitude of 1.5 (the same as the 2nd Preese Hall quake) produced a similar amount of vibration to the train going past at 150m. 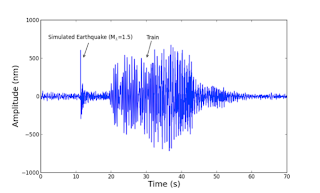 We used an automated trigger algorithm to search our data for potential local seismic events. Sadly, we didn't see anything that looked like a local earthquake, either before or during drilling.

The seismometers that we used are actually designed to detect earthquakes from around the globe. We did spot a number of such events (called "teleseismic arrivals"). Here's an example from a magnitude 7.7 event in Pakistan: 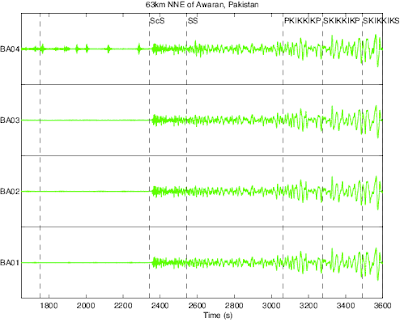 This map shows all 25 such events that we spotted:

One of our stations was only 300m from the drilling site. We did notice that things got slightly noisier on this station when drilling started. This figure compares the background noise before and during drilling. A simulated M0.5 event is shown - this shows up above the noise for both cases. 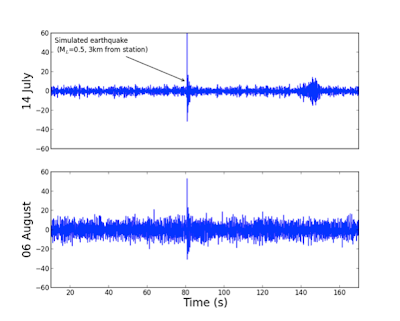 We didn't see any events during our monitoring period. However, we wanted to work out what we could have seen, had something happened. We simulated earthquakes occurring below the drill site, with a variety of magnitudes, and ran the simulated data through our automated detection algorithm, to see what was the smallest that could be reliably identified, given our recorded noise levels

We found that magnitude -0.2 was the smallest we could see. This simulated event is shown below: 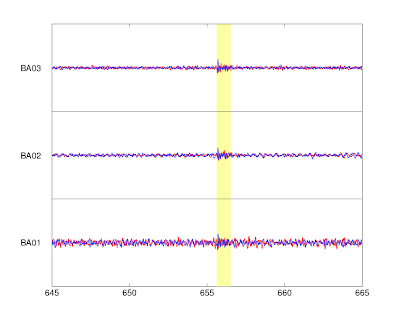 As you can see, it just peaks up above the noise. This is the smallest event we can expect to see. This is just below what is required for the traffic light scheme, so a small array like this could work. However, I'd want to see a larger number of stations to really push the detection limits below the magnitude 0.0 cutoff.

Discussion - Accurate event magnitudes?
We finish with a number of recommendations for the implementation of the traffic light scheme (TLS). A fact unbeknownst to most non-seismologists is that there are in fact a number of different magnitude scales, depending on how magnitude is measured. They are all designed to be close to each other, however they are not always exactly the same.

The most common magnitude scale is known as "local magnitude", or ML. This is basically the good ol'fashioned Richter scale, and is fairly simple to compute. You simply measure the maximum amplitude of the seismic trace, you take the distance from source to receiver, and you put it into a local magnitude equation as I outlined above.

An alternative magnitude scale is the "Moment magnitude", or Mw. This directly relates to the moment (read 'force' or 'energy' in layman's terms) released by the earthquake, and in turn to both the size of the fault and the amount that the fault slipped. Mw is slightly harder to compute - you have to look at the frequency content of the earthquake signals - but probably a better representation of the physical process occurring in an earthquake (as opposed to an empirical approximation, as provided by ML).

Small, local arrays such as ours will typically report ML. However, the dense coverage provided by microseismic arrays (as now installed at Preese Hall) often report Mw. It needs to be made absolutely clear how these different types of measurements will be factored into the TLS, because they may not be exactly the same - indeed at small magnitudes they can be different by half a magnitude unit or more. So, for example, what happens if a quake is measured with ML = -0.1 but Mw = +0.1?

Similarly, all measurements of magnitude are subject to an error. This is rarely reported for the large earthquakes you see on TV - the relative signal to noise ratios for a large event are so large that you can be sure that it is magnitude 6.5 (or whatever) ± a very small amount. However, as you enter the world of micro-seismic events, the signal to noise ratio deteriorates (as you can see in image #6 above). As this happens, the error in the calculation gets larger. Again, the incorporation of errors into the TLS needs to be clarified - what happens if an event has magnitude -0.1 ± 0.2?

These issues do not invalidate the traffic light scheme. However, given that operational decisions, and therefore potentially millions of pounds, hang on the accurate characterisation of event magnitudes, it would be helpful to iron out any potential inconsistencies now, rather than in the wake of another induced event.


In closing, I would like to thank the co-authors of this work, who don't yet have blogs of their own.