Water consumption is not a subject that I have covered much on this blog. I've previously drawn attention to the amount of water needed for UK shale development in comparison to the amount lost by water utilities through leakage every day, but that's about it.

The facts and figures on the typical amounts needed to stimulate wells are well known to most by now, I'm sure (typically several thousand cubic meters per stimulation, and 5 to 20 stimulations per well). It has become de rigueur to make some sort of comparison with golf courses or other water intensive industries, but I think the most instructive information is to simply look at what proportion of total water  use is being taken up by shale developments.

Luckily, these sorts of studies have been done, and in Texas, home of the Barnett, Eagle Ford and Haynesville shales, shale development consumes less than 1% of total consumption in the state. It remains important that water withdrawals in particular areas are managed appropriately to avoid any local strains on water supplies, but less than 1% does not seem like an insurmountable issue.

This is not the end of the story, however. As with any new energy technology, we are not starting from scratch, so the relevant question is the comparison with existing processes. As we speak, my GridCarbon app (very useful, I highly recommend) tells me that we are getting 40% of our electricity from coal.

Therefore, if shale development is going to replace some of that coal-fired power, then the relevant question to ask is whether hydraulic stimulation for shale gas, before burning it in a gas turbine, uses more or less water than burning coal to generate electricity?

A recent paper has addressed this issue, looking specifically at the Texas situation, comparing life cycle water use between shale gas and coal fired power. Their numbers are slightly startling - water consumption per unit of electricity is between 25 to 50 times higher for coal-fired power than for that generated by shale gas. 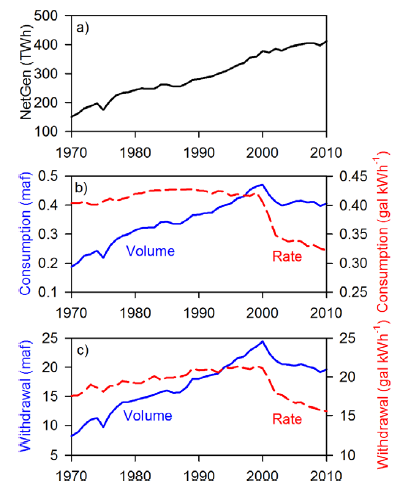 I have copied the headline figure above, showing the net electricity generated in Texas from 1970, and the rates and volumes of water withdrawn and consumed in order to generate that power. Electricity generation has rise inexorably. However, from 2000 onwards, as shale gas has replaced coal, water withdrawals and consumption have reduced substantially.

I'll close with a link to one last paper (if you still have the energy) that again looks at this issue, and again the conclusion is that, with respect to water consumption, how the gas is produced is insignificant in comparison to the technology used to burn the gas in a power station, while using shale gas as a transportation fuel represents significant water savings over other transportation fuels.

Email ThisBlogThis!Share to TwitterShare to FacebookShare to Pinterest
Labels: Water