New rules for hydraulic fracturing have been announced in Germany. This has been widely reported as "Germany bans fracking", but the devil may be in the detail - indeed some groups opposed to fracking have referred to it as a "fracking enabling law". This is because it appears that fracking will be allowed at depths below 3,000m, and "where drinking water is not in danger". It is not clear whether this means in areas where no potable groundwater is present, and/or "if the liquid being used cannot contaminate water".

The laws are due to be further discussed in the Autumn, where hopefully some of these ambiguities will be addressed.

Fracking is not new to Germany. Most of Germany's existing natural gas production, from Lower Saxony in the north of the country, requires hydraulic stimulation to be economic. These are not shale rocks, but "tight sandstones", with low permeability requiring fracturing to improve flow rates. The figure below shows the number of frack-jobs performed in Germany over the last few decades. 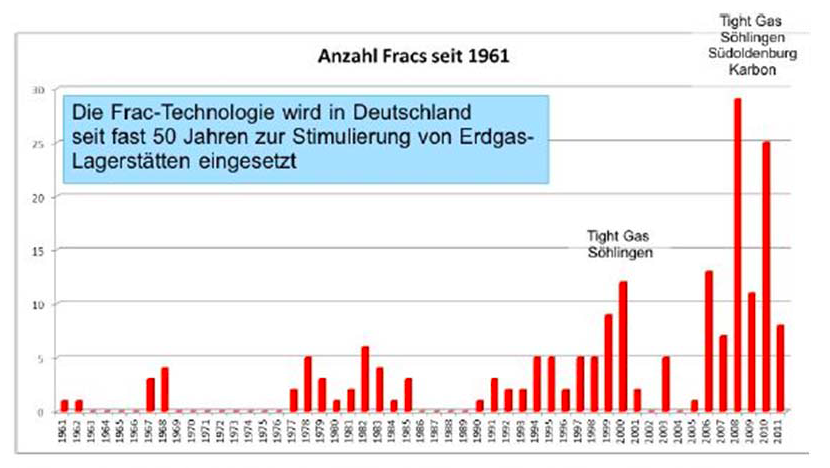 It's not clear whether the proposed ban would include these existing reservoirs.


There's a wider point to be addressed here. I'm often told that we should follow Germany's example in terms of energy policy. Germany's "energiewende" policy has promoted renewable energy sources extensively, resulting in something of a boom for this technology. Indeed, in recent weeks breathless reports announced that Germany had produced 50% of it's electricity needs from solar.

These headlines need some context - this was 50% of electricity over a short period on a summer day that, being a public holiday, saw particularly low demand. Also, electricity only represents part of our total energy consumption profile - we also use energy for transport, domestic heating and cooking, and in industry. In my opinion, the efforts made by Germany in this regard are deserving of praise. However, the additional costs have had an impact on domestic energy prices: 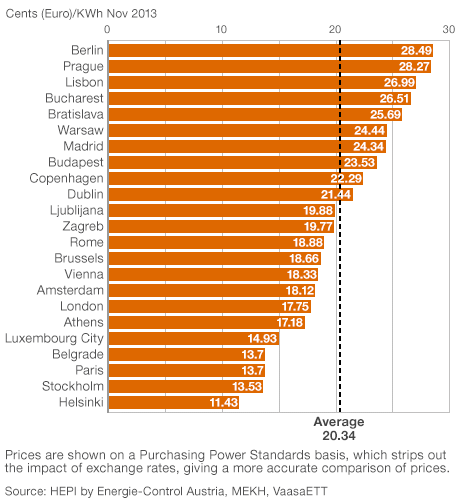 As always, we must keep the bigger picture in mind. The BP Statistical Review of World Energy provides a more sober analysis. Considering total energy consumption, renewable energy sources only provided 10% of Germany's total energy consumption in 2013. That still compares very favourably with the 3.9% we managed in the UK last year.

Ultimately, the reason we develop renewable energy sources is to reduce our CO2 emissions. How do Germany and the UK compare in terms of CO2 emissions? In 2012, Germany produced 810,000kT of CO2, while the UK produced only 490,000kT. Of course, this isn't a fair comparison, because there are more Germans than British. However, even when you take per capita emissions, in 2012 Germany produced 9.7 tonnes per person, while the UK produced 7.7 tonnes per person. It still might be an unfair comparison, because the German economy is generally considered to be stronger than ours. However, even when you consider emissions per unit GDP, the Germans were only able to produce $3,621 of GDP for each tonne of CO2 emitted, while the UK managed to produce $4,284 of GDP for each tonne of CO2.

Given that we in the UK get our energy cheaper than in Germany, and yet produce fewer CO2 emissions, I really don't know why it is that we are so keen to emulate the Germans (their football team excepted, of course).

How can it be that Germany produces more than double the amount of electricity from renewables than we do, and yet have higher CO2 emissions. The clue is in how energy is generated when the sun isn't shining. The picture below gives a clue. 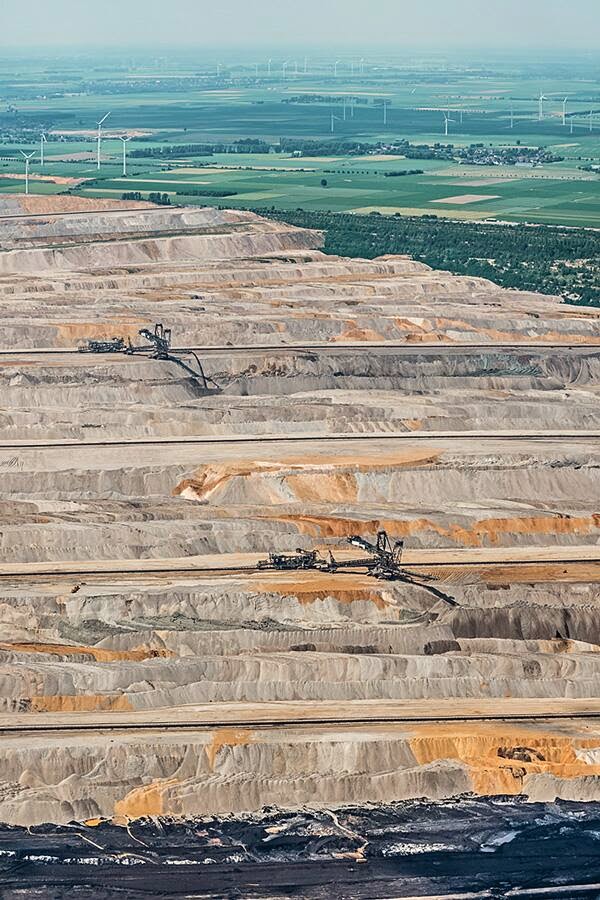 This is an open cast lignite mine. They are big enough to spot easily on google maps, and the machines used in the mining are some of the largest vehicles ever made. Whole villages are being forcibly moved to allow the mines to expand. What is more, the fuel they produce, lignite, is one of the dirtiest burning fuels available. So why does the UK have lower CO2 emissions? Because we burn more natural gas in our mix compared to the Germans, and the CO2 reduction provided by a significant switch from coal to gas exceeds that provided by a small increase in renewable energy.

In conclusion, I find the current situation in Germany to be a little crazy. You can strip-mine your way across the country-side, forcibly moving whole villages, to produce the most CO2-intensive fuel possible. Yet if you want to drill a 6-inch hole in the ground to a depth of 2km, using about a football-pitch-worth of land, and pump some water down said hole for a few hours, to produce a fuel that is the least CO2-intensive of all the fossil fuels? A technique that has been used in some form in Germany for decades? Well, that is not allowed. The mind boggles, as my father would say.

I'd still trade it all for their football team though...