Letters to the Independent


Several letters have been published in the Independent in response to its recent editorial on shale gas extraction in the UK. Because these letters appear to come from academics, with letters and titles before their names, it seems appropriate that I join the discussion.

The first letter is from Professor Andrew Watterson of the University of Stirling. Prof. Watterson argues that


Unconventional gas is not part of an energy solution; it is a major pollutant. It diverts cash, resources and expertise away from work on the more sustainable energy solutions that are now available.

We are running out of time on global warming if we do not develop sustainable energy sources now and reduce unconventional gas extraction, not increase it.

These comments are in stark contrast to the conclusions reached by the IPCC, who are considered by most to represent the final word on climate-related issues. In their Summary for Policymakers, they state that


GHG emissions from energy supply can be reduced significantly by replacing current world average coal‐fired power plants with modern, highly efficient natural gas combined‐cycle power plants or combined heat and power plants, provided that natural gas is available and the fugitive emissions associated with extraction and supply are low or mitigated. In mitigation scenarios reaching about 450 ppm CO2eq concentrations by 2100, natural gas power generation without CCS acts as a bridge technology, with deployment increasing before peaking and falling to below current levels by 2050 and declining further in the second half of the century.

During the press conference to mark the release of this report, the IPCC spokesman was queried about shale gas. His response was


We have in the energy supply also the shale gas revolution, and we say that this can be very consistent with low carbon development, with decarbonisation. That's quite clear.

Clearly, Prof Watterson and the IPCC are in disagreement. I suggest that he takes this up with them.

Prof Watterson then argues that


It diverts cash, resources and expertise away from work on the more sustainable energy solutions that are now available

The figure below shows installed wind capacity in the USA in green, and shale gas production in blue (both normalised to 2013 values). Perhaps even more wind power would have been constructed without the shale revolution, but I don't really see any evidence here of shale gas development distracting from alternative power sources. Indeed, the leaders of several renewable energy industry groups are on record as saying that cheap gas provided by shale has helped them deal with the inevitable renewable energy intermittence issues. 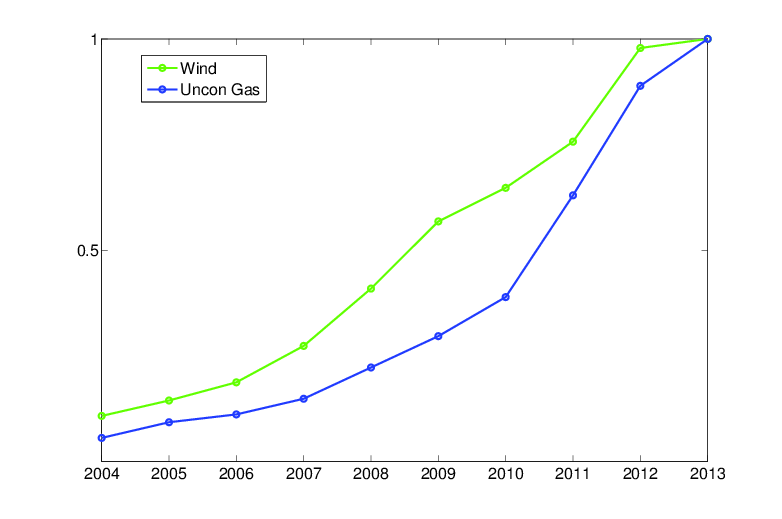 As for the notion that current events in Ukraine can be dismissed as a "scare stor[y] about ephemeral energy-supply crises in Eastern Europe", well, this is hardly worthy of comment, suffice to say that Eastern Europeans are very keen to access secure gas supplies, for obvious reasons.

Prof Watterson is also unable to "make sense" of the possibility of having regulations that are both strong and yet do not cause undue delay to operators. The purpose of regulations is to ensure that operating practices take every safety precaution into account to ensure that risk is as low as reasonably possible (ALARP). The purpose of regulations is not to cause operators unnecessary delay unless doing so will make an operation safer. At present, to drill and frack a well, shale gas operators need a wealth of permits and permissions from a variety of bodies, including DECC, the Health and Safety Executive, the Environment Agency, and local planning agencies.

These agencies all work in different ways and to different timescales. "Streamlining" regulations across these organisations will not mean that a well is or is not cemented properly; or that cement bond logs are or are not run to detect any well integrity issues; or that multiple bunding layers are or are not installed to isolate the drill pads from groundwater; or that methane is or is not monitored in groundwater and in the air before, during and after drilling; or that fluids are or are not stored in double lined steel tanks, placed on drip trays. No-one is talking about changing any of the regulations pertaining to these issues. Simply that the process of applying for permits is made more efficient not only for the operator, but also for the regulating agencies: it is equally important that the different regulators know what each is doing with respect to a particular application.

Dr Robin Russell-Jones also takes issue with the IPCC conclusions on shale gas. Development of shale gas may well lock us in to production for at least 30 years, but then the IPCC argues that gas consumption must increase between now and 2050 (36 years hence) to meet 450ppm stabilisation targets.

Dr Russell-Jones also takes issue with the assumption that "transition to a truly green energy system is unachievable". Whether or not this is really true or not, I genuinely do not know. I'd like it to be possible. However, no modern industrialised country, with the exception of a few small, unusual cases (for example Iceland with abundant and easily accessed geothermal) has yet achieved this, or come even remotely close to achieving this. So I do not know where Dr Russell-Jones gets his evidence from to declare it to be so adamantly untrue. His second comment is simply not supported by evidence. While estimates of methane emissions from shale pads have varied, no measurements have shown that methane levels have reached those needed to make natural gas worse for global warming than coal. Moreover, natural gas leaks are easily fixed where necessary.

Finally, Dr Lowry argues that shale extraction in this country may be uneconomic anyway. In which case lots of gas companies will lose money, which surely is no bad thing if you oppose the use of natural gas. Given that the money invested is their own, these companies can sink or swim on the basis of their own decision making. Clearly Dr Lowry knows more than the geologists employed by Total, GDF Suez and Centrica.

Moreover, the reason that some gas companies are struggling in the USA at present is because the price of gas has plummeted there, which has been great news for domestic and industrial consumers alike. If Dr Lowry is arguing that we'll see a similar plummet here then I am sure the news will be welcomed by most. If, as is more likely, gas prices are reduced a certain extent but not to the amount seen in the USA, then shale gas extraction will remain viable, and will be taxed, providing much-needed funds for local and national government alike.